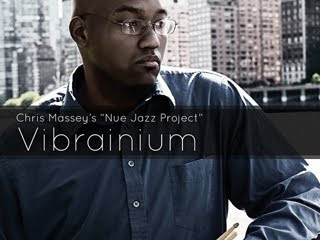 Saxophonist Wayne Shorter is one of the few jazz icons on record as a self-admitted comic book fan. The fantastic four-color mythologies of both Marvel and D.C. imprints have at least indirectly inspired several of his compositions over the decades, most conspicuously with the classic “Kryptonite”. Drummer Chris Massey appears in possession of a similar admiration as the title of this self-released album makes clear. Vibrainium is a pun on Vibranium, one of a host of rarified fictional metals perhaps most famous as material constituting Captain America’s shield. It’s also one of the principal natural resources of Wakanda, the African nation home to Black Panther, the first black superhero in American mainstream comics and a cultural connection that no doubt resonates strongly with Massey.

Musically, Massey’s influences reside firmly in the advanced hardbop of the Blue Note Sixties, another common ground with Shorter. His “Nue Jazz Project”, a quintet comprising the horns of Donald Malloy and Benjamin Drazen and a rhythm section completed by pianist Evgeny Lebedev and bassist David Ostrem. The cerebral connotation in the title and another commonality with Shorter comes through in Massey’s clever compositions and arrangements. Borrowing its title from the world-eating celestial villain of the same name, “Galactus” joins the title piece in directly referencing elements from comics. Both run close to twice the length of the other cuts and open up ample modal space for the players to solo and interact.

Drazen’s alto owns the burning rendering of Joe Henderson’s “Inner Urge”. Name-checking the Yoruban god of thunder, “Chango” gives Massey brief space to flex his sticks in a solo setting while Chick Corea’s “Windows” naturally shifts the focus to Lebedev’s keys and gives both Malloy and Drazen a breather. Massey keeps a brisk and variable selection of rhythms cycling around and beneath his sidemen and the album zooms by. Drazen’s “Mr. Twilight”, a superhero moniker ready-made, closes the album out in much the manner it began with a propulsive vamp from Lebedev and darting horn unisons and a steady frothing beat. Spinning these effervescent sounds, it’s not hard to come up with an early Kirby-Lee collaboration as convenient visual analogue.
Posted by derek at 11:33 AM