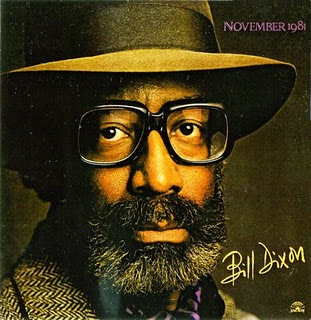 Bill Dixon is gone. Fred Anderson is ailing. This week has been one of the worst in recent memory for creative improvised music. Reason enough to interrupt the relatively rigid format under these rafters for a salvo of positive thoughts beaming out to the families and loved ones of both men.

I haven’t been as in tune with Bill’s recent work, but an out-of-the-blue email from him seven years ago is an event I still treasure. Prompted by a piece of mine on Berlin Abbozzi (FMP), he wrote to inquire whether I’d be interested in reviewing Odyssey and Dixonia, the box set and bio-discography. Tabling self-doubts of doing both justice, I jumped at the chance and about a week later copies of both showed up in my mailbox. Both pieces published at One Final Note and Bill’s feedback was warmly and reassuringly positive. Our correspondence after that was at best sporadic, but he thoughtfully sent me Xmas cards for the next several years. I never once experienced any veracity to the recurring charges of rampant ego and withering ire that certain critics lodged at him. I’m going to miss him.

Fred is still with us and is hopefully on the mend. My history with him goes back to the late-90s and my tenure in Madison. Semi-monthly trips to the Velvet Lounge are some of my fondest memories from that period of my life. Fred behind the bar, spinning Charlie Parker (the Carnegie Hall set w/ Diz released by Blue Note was a favorite) and serving tap beers. Him hanging up his bar rag & shuffling to the stage to sit-in with the night’s acts, the gloriously garish wallpaper that now serves as this site’s banner serving as a most apposite backdrop. His signature knees-bent hunch and the prescription lens behind which the kindest eyes smiled out. Years later seeing and speaking with him at the Vision Festival. Witnessing the adoration and esteem expressed in equal measure by those who knew him and those who didn’t. I had hoped to bring my wife to see him in Chicago this summer and still hope to. Here’s to a swift and seamless recovery and an eventual return to music-making on his own sweet time.
Posted by derek at 2:28 PM