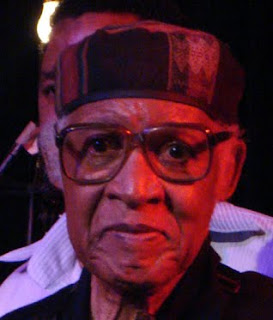 A previous post harboring hope now has as a sobering finality to it… Fred Anderson is gone. Details are widely available regarding the particulars of his passing so I won’t dwell on them here. Despite best laid plans, I wasn’t able to immerse myself in Fred’s recorded work to the degree that I had planned. That disparity between intent and outcome got me thinking about cause and effect relationships and more specifically the death of a musician signaling a flurry of homage-minded listening on the part of fans. The practice is widespread, though it’s one that ultimately means little beyond the symbolic and cathartic gestures at its core. It also only touches on one facet of his legacy, the legions of listeners he mentored and the physical edifice of the Velvet Lounge as performance space oasis being two others among a multitude.

Fred was regular part of my listening diet whether via recent releases like the excellent Black Horn Long Gone and 21st Century Chase or classics like Chicago Chamber Music and The Missing Link. He left a lot behind and the tape trove from the Velvet (both old and new) promises a reservoir of riches for years to come if those holding the keys find the resources and wherewithal to make it so. My fingers remain crossed, but in the meantime another mantra-like missive comes to mind at times variously credited to Jackie McLean and others: “Give them their flowers while they’re here.”

Fred had his share of encomiums in his twilight years with people all over the world rightfully singing his praises and offering continual thanks for his artistry and humanity. Plenty of others who take up the calling aren’t so lucky. While Fred’s good fortune is something to treasure, the decades he spent in relative obscurity are also a healthy reminder that this business of music can be an unrelentingly harsh mistress. As Fred was wont to wisely say, the rewards don’t come from the recognition anyway, but rather from those who are touched and in turn decide themselves to touch others through musical means. He certainly made that relationship manifest in his own work, stewarding countless students in the music while continually following his own muse. On my peripheral end, all I can do reliably is listen (and comment) and it’s something I’ll continue to do by Fred’s lasting example. Thanks for the music & memories, Wise One.
Posted by derek at 1:34 PM