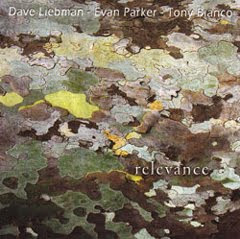 By practically any educated estimation, Dave Liebman and Evan Parker are saxophone icons. Each man has advanced the post-Coltrane lexicon on the instrument in deeply personal and divergent directions. Liebman’s preference is jazz-based. Parker retains analogous roots, but his reed explorations have also encompassed European free and electro-acoustic improvisation as well as modern classical forms. Those disparities in no way nullify the amount of common ground shared by the men. This date, prompted at Liebman’s behest and recorded in concert at London’s Vortex, an old stomping grounds of Parker’s, proves their parallel mindsets from the opening salvo onward.

Drummer Tony Bianco serves as the percussive trampoline atop which the two saxophonists freely bounce and cavort, no easy assignment considering the magnitude of saxophone ordinance on hand. He’s also an occasionally frustrating aspect of the trio, giving over to lengthy sections where tumbling snare and tom-tom tattoos set up a lock-step backdrop that seems to rub off on the horns through increased repetition and pockets of stasis. Neither Parker nor Liebman is the sort of improviser to be contained, but in light of Bianco’s choices it’s also hard not to pine for a drummer like Paul Lovens or Paal-Nilssen Love who might’ve brought more versatility and nuance to the kit. In the drummer’s defense, there’s never any question that it’s the saxophonists’ show and he dutifully cedes them the ground required for their respective pyrotechnic displays.

The two sets documented, each broken down into lengthy first parts followed by shorter seconds, explore every possible combination of players with the co-leaders starting out on jousting tenors and moving on to keening sopranos as well independent sections with Bianco. Parker reins in his circular breathing virtuosity on the straight horn, voicing instead on occasion in a more overtly melodic vernacular, particularly in the second set. Liebman switches up too, tapping the late-Coltrane side of his personality and leaving any decorous theme-based jazz-speak backstage. The effect is like two lodestones lining into magnetic synch with each other, the aforementioned common ground getting a thorough tilling in the bargain. While the wish for greater variety and cohesion could certainly be levied, the chance to hear these two giants in tandem easily outweighs any minuses set into play by the evening’s sometimes skewed dynamic.
Posted by derek at 7:05 PM