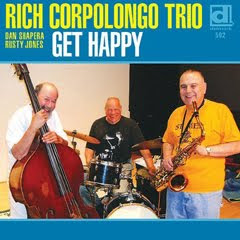 Tenor, bass and drums projects will probably forever be name checked against Sonny Rollins’ pioneering parables with the form. In the case of Rich Corpolongo the connection fits. As one of the younger “old reliables” of Delmark’s current tenor stable, his latest release is a long overdue showcase for his talents sans piano. Along for the ride, but also willing to take the wheel when tapped are bassist Dan Shapera and drummer Rusty Jones, Chicago-based session men who fill their respective instrumental roles with journeyman skill and the goal of making their employer look good.

The program is ripe with blowing vehicles in the guise of standards, from a pair of bookending Bird tunes to the lesser picked standard “Mangoes”. Corpolongo and his colleagues indulge in each one in earnest. Applecart-upsetting surprises are few, but there’s no faulting the caliber of tenor play brought to the party. Corpolongo counts Coleman, Bird and Coltrane as his principal points of influence and each man is apparent in his philosophy toward improvising if not explicitly audible in the personalized manner with which he phrases a line. A relaxed sally through “Body and Soul”, largely unaccompanied, has the tenor choruses spooling out at length and the leader reveling in his own brand of “spontaneous composition”.

The notes make complimentary mention of the “old school” recording techniques used to capture to the music. Curiously, the sound quality is the only slight sticking point with the session to these ears. A bit boxy and flat, a two-mic in theater space set-up doesn’t seem to do the players any favors, particularly in the case of Jones who comes across as discouragingly diluted in conversation with Corpolongo on the otherwise amiable and invigorating “Wrap Your Troubles in Dreams”. Still, this is a minor quibble and one easily eclipsed by the sustained élan and swagger of Corpolongo and crew. Fans of Chicago tenors classic and contemporary would do well to give this date a considered shot.
Posted by derek at 6:29 PM