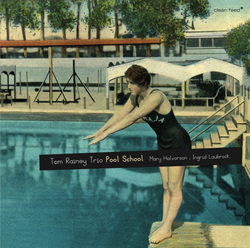 A much-belated case of “giving the drummer some”, Tom Rainey’s debut as a leader is long-overdue formal recognition of his substantial talents. Leave it to the relentlessly prolific Clean Feed label to recognize and rectify the lapse. Rainey’s appeared on a number of the imprint’s releases over the years and his gig docket remains reliably full via projects with Tim Berne and a host of others. Typical to form and true to the press blurb on the CF website, this set “sounds nothing like anything recorded by Rainey as a sideman.”

Equally crucial to the music’s singularity are Rainey’s chosen colleagues. Guitarist Mary Halvorson handles her Guild hollow-body with an ear closely-aligned toward eclectic sound production. Plugging-in through a trusty Peavey amp, her contributions have oblique reference points in the work of Joe Morris (a mentor) and Derek Bailey in the canny use of distortion detonations between spidery arpeggios and fills. Halvorson regularly invents melodic helixes on the fly, her intricate patterns spun in gossamer, near-acoustic filigrees or boldly crunching riffs. Add to that an uncanny and instantly-endearing ability to acrobatically twist notes like cherry-stems between teeth.

Saxophonist Ingrid Laubrock, a new name to me, evinces a similarly broad-minded tack toward tone and phrasing. Post-Ayler squeals and sputters are a part of her playbook, but so are the dryly aerated breath sounds and reed pops that fall more under the common rubric of European improvisers like John Butcher. She’s also adept at straight melodic blowing that limns surprisingly close to postbop norms. Rainey revels in the strong support, his stick play often skirting strict meters in favor of a loose, but still carefully structured patter to clatter that keeps the program moving at a reliable clip.

A dozen pieces shuffle by in just under an hour, the resulting ratio keeping individual selections terse and to-the-point. The trio’s humor manifests in the title puns, “Om on the Range” and “Clean Feat”, the latter an obvious nod to their benefactors. From the spooky intervals of “Calico Road” and the fractured, hair-pulling funk of “Three Bag Mary” through the set closing shadow play of “Pacification” that finds Laubrock switching to what sounds like mouthpiece sans sax each piece has its own earmarks, but all hang together cogently as an album-organized statement. Rainey may be a late-bloomer on the leader front, but the wait was definitely worth it.
Posted by derek at 5:47 PM