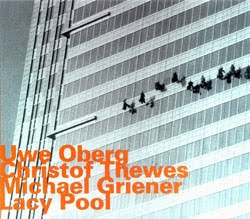 One measure of a composition’s longevity is its relative receptiveness to reinterpretation. Steve Lacy’s songbook was largely neglected during his lifetime, but the dearth of interpreters was more a function of a paucity of transcriptions than any reflection on rigidity or recalcitrance in his tunes. The German trio Lacy Pool proves conclusively the malleable properties of their namesake’s folio on this live set taped at Loft in Cologne. The band name has a delicious double meaning encompassing the kinetic geometries of billiards reflected in their angular and inventive approaches to Lacy’s tunes as well as the deep reservoir of pieces from which they draw.

Repertory bands operating under a Lacy-centric rubric are promisingly on the rise. Ideal Bread out of New York and The Rent from Toronto have each turned in valuable albums. Pianist Uwe Oberg, trombonist Christof Thewes and drummer Michael Griener are arguably even more radical in their explorations. Part of that distinction derives from their instrumentation, which immediately pulls the pieces out of the familiar frameworks originally forwarded by their composer’s straight horn.

The band has something of a chamber dynamic in collective sound and temperament. Each man is an expert at injecting texture and color, Thewes through a number of plunger and embouchure modifications, Griener through a studied touch on brushes, cymbals and peripheral percussive devices. Oberg is a bit constrained by the tempered nature of keys, but he still succeeds in subverting their stricter tonalities with an array of interior and pedal dampening moves. Thewes gurgling nasalized growls on “Flakes” offer one of the more extreme examples, burbling over a cyclic rhythm from Grenier on what sounds like Gamelan gongs. The dour legato tones, gossamer brush play and piano string scrapes of the Eastern-tinged “Retreat” represent another.

“Stamps” is full of playful elbow-bruising, head-butting collisions while “The Crust” rolls out like a delicate tone poem, Griener’s fluttering brushes bracketing a slow coalescing of the theme. “Blinks” builds from bright effervescence and incremental stair-stepping progressions. Thewes drops out on a section of “The Dumps”, leaving Oberg and Griener to stride-inflected dialogue that echoes trad jazz hi-jinks of Art Hodes and Cie Frazer before a communal rhapsodic finale. “Raps” gallops along like a roughsod boogaloo dirge, Griener thwacking a sturdy backbeat over which Oberg and Thewes twirl. It’s not hard to conjecture Lacy beaming with pleasure had he lived to hear these at once faithful and fertile sounds.
Posted by derek at 7:42 PM