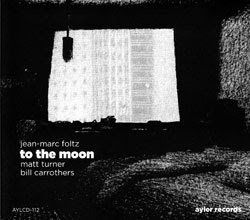 Music has long been a useful implement in the evocation of place. That hoary relationship registers at the forefront of this set, recorded at the height of winter in icebound Minneapolis in 2008. Clarinetist Jean-Marc Foltz mentions the “lovely, freezing cold day” that precipitated the completely spontaneous sounds. Cellist Matt Turner, an unsung improviser and native of the region has such climatic corollaries in his blood. Pianist Bill Carrothers is comparably attuned and all three men build austere and pristine assemblages that wouldn’t be out of place on the ECM or Nuscope labels. The music is testament to the Ayler label’s resistance to reductive pigeon-holing when it comes to the pedigrees of chosen projects.

Chamber jazz is a wide brush summary for what happens here, but closer listening reveals a bevy of detail in the players’ improvised exchanges. Carrothers goes under the hood on the aptly-titled “Knitting Needles”, plucking his strings in brittle harpsichord fashion in a manner that brings to mind some of Paul Bley’s constructions in the company of Jimmy Giuffre. Turner’s saws high swirling harmonics on cello as Foltz blows fog horn bass clarinet. The Giuffre effect is even more prominent on “Moondrunk” as Carrothers and Foltz piece together an twining progression shot through with enveloping space that pleasantly echoes the mix of mystery and revelry intimated by the title. On “Crosses”, it’s Foltz’s turn with rafter-scraping harmonics as he etches controlled reed chirrups against a lyrical repeating motif spun by Carrothers and Turner.

Turner’s classical chops and precision command of pitch match those of Foltz on the verdantly textured “Gallows Song”. Carrothers provides staggered commentary to his colleagues’ acrobatic counterpoint and once again the three players demonstrate and uncommonly close communication. The waltzing calliope patterns of “Old Pantomimes” are enhanced by Carrother’s preparations which create a gauzy percussive effect in tandem with his tamper-free keys. “To Columbine” centers on Foltz’s liquid clarinet in its opening minute, Turner’s cello soon joining with starkly drawn strokes and Carrothers completing the melancholy mood with minimal clusters from his corner. These three players take a trio of common chamber instruments and successfully construct new settings for their application. It’s no small feat and one that motivates an immediate repeat of the program in entirety.
Posted by derek at 5:52 PM