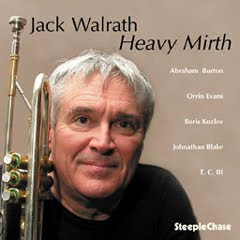 The pleasures of a working band in action are profusely accessible on this latest session under the leadership of trumpet player Jack Walrath. Bassist Boris Kozlov and drummer Jonathan Blake are the only holdovers from his last Steeplechase effort, the ballad peppered Ballroom, but the band was several tours steeped by the time they hit the studio together. Pianist Orrin Evans and tenorist Abraham Burton sound like natural fits in their respective roles take to the nine originals with nary a hesitation.

In Walrath’s own words it “was a no sweat date”. That’s not to suggest that there isn’t any heat or calories expended. To the contrary, Walrath and colleagues hit the tunes hard with little room leavened for niceties. The leader’s signature brand of hardbop originates out of a Mingus assemblage of roots, but his many projects over the years have also pulled from rock, funk and most pervasively the blues. The band is also populated by members past and present of the Mingus Big Band, a shambolic aggregate that also counts Walrath as an alumnus.

“Bassballs” is the first of a number of pieces that pinpoint Walrath’s laconic brand of humor in their titles. It and “Dark Star” are brisk and moody bop numbers that wouldn’t sound foreign on a classic Blue Note platter from Lee Morgan or Wayne Shorter. Walrath plugs a mute in his bell for the latter, sounding like a two-martini deep Miles in his essay of the theme. Burton’s tightly knotted solo offers Coltrane-quality contrast and Evans’ dusky robust comping also helps immeasurably in establishing a constructively combative mood. “It Must Be a Holiday, So Why Do I Have the Blues” channels the long-windedness of its title into a juxtaposition of tenderness and temerity with Burton once again standing out.

“A Long, Slow, Agonizing Descent into the Depth of Despair” signals the arrival of enigmatic T.C. II on guest vocals with a string of blues-fermented verses that were apparently improvised on the spot, proof once again that conformity to conventionality isn’t wired to Walrath’s character. A Mingusian mettle to buck and tweak the system pervades these pieces even as they adhere to the argot that’s served jazzmen for nearly half a century. Bottom line, Walrath’s chops and imagination are still intact. The dues-paying he’s done over the years only assures that date’s like this one will reliably come in well under par.

[Steeplechase titles are available direct through Stateside AT prodigy DOT net]
Posted by derek at 7:15 AM