Jason Roebke - In the Interval (self-released) 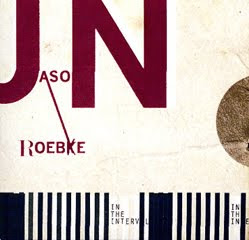 Bassist Jason Roebke is an enviably busy musician. Projects and gigs are deservedly plentiful these days, often in the company of Chicago and New York-based colleagues like Mike Reed, Keefe Jackson and Nate Wooley. In light of the flurry of activity of the past few years it’s easy to forget that he’s been plying his craft for well over a decade. Most of his current docket aligns with jazz-related contexts. As an outlet for his interests somewhat removed from those realms comes this solo studio recital, a difference noted in the disc’s title. It’s actually his second in the format, the first having garnered initial circulation on the Family Vineyard imprint, though now apparently available only via iTunes.

Comprising two pieces that combine to modest EP length, this set is a markedly different affair from its predecessor. The first track clocks to just over a third of an hour opening and closing with a single resounding string pluck. Between those stark temporal markers, Roebke reveals a second meaning behind the disc’s title by inserting lengthy intervals of rest on his instrument that decrease and increase incrementally in duration as the piece progresses. The first pause lasts nearly half a minute, but feels much longer and the effect at first resembles Cage’s “4’33”” as acoustic aspects of the studio space in relation to Roebke’s bass become audible in the near-silence. These frequent segments of relative stasis add both gravitas and definition to the moments where tones and patterns are sounded. The buzz and bustle the second piece serves as welcome contrast.

Roebke’s percussive preparations to the body and strings of his bass further vary the sound menagerie. Creaking, tapping and rubbing ornamentations scuttle around the edges of fully-rendered pizzicato progressions. Both pieces makes canny use of these ulterior elements and there’s even a section in the first where the squelchy textures of what sound like muted electronics accompany Roebke’s quiet string manipulations though they very well may be the product of acoustic sources. In sum it’s a musical experience that actually improves through repeated encounters as the frustrations of expectations fall away in favor of the logic and cohesion of Roebke’s elaborate and spacious designs. The rewards may not be as immediate and easily-won as his jazz-centered playing, but they’re every bit as manifest to the perceptive listener willing to make the aural trek.
Posted by derek at 4:26 PM