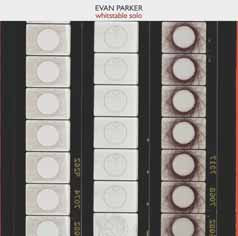 Nearly four decades deep into the Evan Parker solo performance precedence and despite what some critics might contend the saxophonist is still finding fresh things to say on both straight horn and curved. A confluence of new recording space (St. Peter’s Church, Whitstable), trusted engineer (Adam Skeaping) and extra-disciplinary collaborators (artist Polly Read and film-maker Neil Henderson) help make this set recorded in the summer of 2008 special. Parker states a preference for the pristine acoustics of the space in his succinct notes and it’s impossible to argue with the assessment. A photo shows him facing the nave, the vaulted ceilings of the building forming an inviting echo chamber for his intricate improvisations.

First recorded is actually last in sequence, exerting a temporal bait-and-switch that has Parker’s pre-performance musings bookended at the close. The concert starts with Parker conjuring a binary stream of multiphonics sustained with circular breath. Each layer seems to operate independently in a lubricious opposition that creates the illusion of forward and retreating momentum. It’s a trick Parker’s plied to audiences past, but here in the lucid acoustics of the church each coiling line gains even greater detail and incisiveness. The two converge in the closing seconds into a single ceiling-pitched cry. Parker keeps any urges toward loquaciousness in check. The concert’s closer tracks a similar tack in more blended fashion and nearly all of the pieces clock to comparatively modest durations. That economy enhances the program’s accessibility along with a general skew towards the mellifluous and rhythmic.

Several other sections directly mine the language of Lacy with an improbable admixture of feathery and abrasive tones voicing by turns clipped and measured phrasings and the occasional Bechet-sized burst. The fourth and fifth sections even quote a couple of the departed saxophonist’s tunes though my Lacy lexicon isn’t up to snuff enough to successfully tag them and bag them. It’s all perfect fodder for sneaky Blindfold Test sleight-of-hand. Hearing Parker play the semblance of song structures makes those plentiful stretches where he plies the usual meticulous barrage of extended techniques all the more palatable. His postscript promises more projects recorded in the St. Peter’s space, a promising prospect indeed.
Posted by derek at 7:02 AM