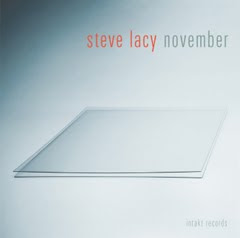 As catalysts to a host of conflicting emotions, final recordings commonly carry more baggage than those that come prior. Sometimes the results are heartbreakingly catastrophic, as with the case with Lester Young’s last foray in front of microphones in Paris. Other swan songs reflect still triumphal talents cut abruptly short. Steve Lacy’s last solo concert falls far closer to the latter summation than the former. A disheartening diagnosis of liver cancer earlier in the year left him increasingly prone to fatigue, but hardly daunted. Instead, he took it as a lemons-to-lemonade sign to redouble his efforts in teaching, recording and performance.

Recorded at the Unerhört-Festival, Switzerland late in the titular month of 2003, Lacy runs through a program of tunes common to his concert repertoire of the time. Bill Shoemaker explores a prevailing element of Lacy’s coming to terms with his impending mortality in his accompanying essay. It’s not a leap in logic given the topical underpinnings of several tunes and the reflective nature of their renditions. Lacy takes a cue from his life partner Irene Aebi by speak-singing a few lines on “Tina’s Tune” that tellingly nod again to the relative frailty of This Mortal Coil and the pregnant pauses that pepper the piece thumb presciently in this direction as well.

Recurring moments arise where Lacy sounds slightly winded and the soaring, diving flights of earlier years aren’t much in evidence. Even so, there are also startling moments of technical and creative acumen as through the abrasive trills that pepper “The Door” and “The New Duck”. Lacy’s wry humor is intact as well with the wood-knock punctuations that crop up in the first piece. On the second, his hoarse reed exhortations, puckered pops and curling harmonics make it abundantly clear that even an ailing Lacy still has sturdy sea legs for improvisation. A curious mild echo on “Blues for Aida” only adds to its poignancy and cyclical sing-song simplicity of “The Rent” gives off its usual array of Monk-refracted charms. Lacy culminates the set with a direct hat tip to Mr. Hat and Beard with “Reflections” delivering it with a playful plangency that lingers long after the last cursive note sounds.
Posted by derek at 10:55 AM