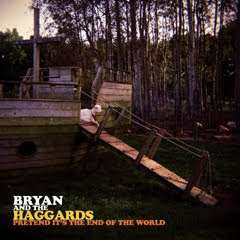 Country and jazz have rarely been congenial bedfellows. Sure, there’s the heyday of western swing to consider and much more recent cross-pollinations like the Blue Note-backed collaboration between Wynton and Willie, but more often the genres reflect and oil and water dynamic. Cue Bryan and the Haggards, a hardcore honky-tonk freebop collective who aims to mend any flattened fences while simultaneously removing any need for them in the first place. A swift survey of the roster reveals how well the players are suited to the task. Altoist Jon Irabagon and bassist Matthew “Moppa” Elliott are two fourths of Mostly Other People Do the Killing, a sister ensemble that makes it its business to eradicate similarly ironclad genre distinctions. Tenorist Bryan Murray, guitarist Jon Lundbom and drummer Danny Fischer are new names to me but based on what’s on hand here they’re now radar fixtures.

Regular Hot Cup provocateur Leonardo Featherweight supplies the edifying liners, which not only run down key elements of Hag’s history, but more germane to the project several serendipitous path crossings with bassist Charlie Haden. The ensuing punch line, Merle Haggard’s influence on the music that came to be known as “free jazz” is unquestionable and the purpose of The Haggards, to explore the complementary nature of the “New Thing” and the “Bakersfield Sound”. All of this may naturally seem like a taffy-like stretching of the historical record, but sounds themselves are anything but suspect. Tailoring seven Strangers-era standards to free-jazz friendly interpretations isn’t a cake walk, but neither is it reinventing the wheel and harmelodic Haggard ends up not as far out as first imagined.

“Silver Wings” hits an early wrong note with Lundbom’s overly rockish and overbearing guitar, a move he repeats on the closing conflagratory “Trouble in Mind”, though the horns strike on just the right anthemic “tears in beer” sweep. Lundbom rights things on “Swinging Doors”, going for twang and shimmer instead of craggy feedback. Fischer hits the proper four-square backbeat on brushes in tandem with Elliott’s clip-clopping strings and the solos practically bleed rye-soaked sawdust. “Working Man Blues” ups the tempo with some sharp jousting by the horns and knife-edged fret play from Lundbom that sounds like Jimmy Bryant on a lysergic bender. Ballad time arrives with the beauteous stroll through “Miss the Mississippi and You” and a lovely lengthy dialogue between Murray and Irabagon. Purposefully fractured and hobbled, the bent take on “Lonesome Fugitive” signals the homestretch with more jocular song deconstruction and reed-perforating blowing and “All of Me Belongs to Me” debuts Elliott’s pie-in-the-face Bakersfield-meets-scat vocals. I just have one question though; it being a Hag homage, where exactly in the hell is the pedal steel?
Posted by derek at 4:37 AM