Ethan Mann - It's All About a Groove (Petunia) 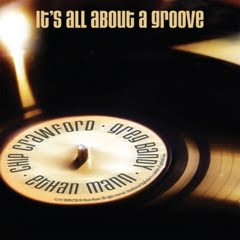 Truth in titular advertising definitely applies to this trio date. Groove and feel are paramount to guitarist Ethan Mann’s musical philosophy. Keyboardist Chip Crawford and drummer Greg Bandy are of a shared music-making consciousness. All three men have been gigging since their teens in a multitude of setting. Bandy had the distinction of working New York City clubs during the Seventies and good fortune to curry favor with profile band leaders like Pharoah Sanders and Gary Bartz. Mann and Crawford never hit it quite that big on their cabaret cards, but both have stayed busy over the decades as well.

Mann designs the program as a reflection of a typical club set for the trio and the player’s formative Seventies-selves play palpable roles. Once again that titular mantra is at the forefront of their interplay and execution from the opening “Foxy” onward with blues and funk as recurring undercurrents. Popular song serves as another wellspring for the band songbook starting with Michel Legrand’s Latinized easy listening favorite “What are You Doing the Rest of Your Life.” Mann handles the leads with aplomb and Crawford lays down populous support with his instrument zeroed in on organ and Rhodes settings. Bandy’s often the glue, his rhythms tying each piece together without constraining his colleagues in their own contributions.

Mann offers mild surprises in a three-song shout out The Stylistics starting with “Betcha By Golly Wow”, outfitted with a pleasant if slightly schmaltzy lounge groove built on a rubbery electronic bass line from Crawford. “People Make the World Go Round” fares better with a harder rhythm and a stronger melody as the trio convincingly sets the studio calendar back to 1972. The piece also allows Bandy to breakdown his bonafides as a funky drummer through a string of killer break beats. Obligatory Coltrane comes out in Mann’s thin contrafact “Minor Steps” and there’s even room for a vocal by the guitarist on the near-parody talking blues number “Woman Please”. A pleasant enough session, this set is far from essential, but that’s also an appraisal these convivial players would no doubt agree on.
Posted by derek at 2:51 PM