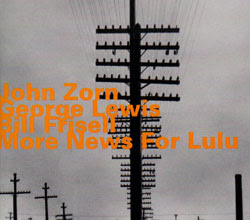 Altoist John Zorn still takes it on the chin from certain critics when it comes to his cavalier claims of minimal practice on his instrument. Fortunately, he’s got something an iron jaw and comparable chops to contradict any charges of dilettantism or rampant drollery. This set and its earlier companion still serve as figurative bandoliers of ammo when a defensive position is required. Zorn plays more than convincing hardbop saxophone over the course of fifteen tracks pulled from a pair of concerts in Paris and Basel in 1989. True it’s often the sort of maniacal blowing punctuated by his bombastic and comical squeals and sputters, but his vocabulary is also Gatlin gun quick and mostly structurally faithful to the songbook under scrutiny. Misha Mengelberg’s “Gare Guillemins” and John Patton’s “Minor Swing” point to a more recent group muses, but their tightly wound bop-inflected arrangements fit right in with the rest of the program.

Zorn’s partners, trombonist George Lewis and guitarist Bill Frisell are on the same page completely and digesting this insouciant music it’s quickly apparent how and why the trio made such strides in such short a span. Tunes by hardbop stalwarts Kenny Dorham, Hank Mobley, Freddie Redd and Sonny Clark are the springboards for improv-riddled interpretations that at once celebrate and reconstitute the earlier jazz canon in fast and loose fashion. Lewis plays without electronics and it’s a pleasure to hear his range of timbral effects independent of such enhancements. Frisell swings in the opposite direction, bringing an array of electronic equipment to bear on his strings and expanding the group’s sound palette significantly as a result.

Zorn and Lewis engage repeatedly in active free association starting with the lead-in to Clark’s “Blue Minor”, but the corkscrew root themes of the pieces are just as important to their interplay as the variously humorous deconstructions. Counterpoint factors frequently between the three and only rarely does the individual derring-do end up out-of-step. Engineer Peter Pfister’s new 2010 master of the material is several shades cleaner than the set’s previous long-out-of-print incarnation. Infrequent junctures arise where Zorn is off mic, but these are hardly a detriment to the performances. Presaging the work of current ensembles like Mostly Other People Do the Killing and Cargo Cult, this trio wasn’t about immolating their idols and sowing new seeds in scorched earth. Rather, the thrust rested on investigating compatibility of the work canonical composers left behind with newer approaches to improvisation. The sterling results here and on the trio’s companion collection preserve a potent admixture of their experiments while simultaneously priming expectations for a reunion.
Posted by derek at 4:26 AM