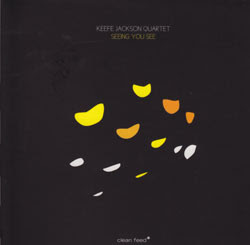 Likening the Chicago jazz scene anatomy to an onion might seem like a ridiculous exercise in reduction, but it’s also a way to symbolize the layered, intergenerational relationships that exist between the city’s players. Hailing originally from Arkansas, reedist Keefe Jackson resides on the younger end of that populous spectrum, his industrious track record representative of the prevailing collaborative ethos. Fast Citizens, co-led by colleague Aram Shelton, arguably remains his highest profile ensemble thanks to an ongoing Delmark association. Jackson’s ambitious 12-piece Project Project band also has a home there and he’s made a name for himself fronting various creative ensembles.

Making a logical label switch to Clean Feed, this quartet pulls in another contingent of Windy City cohorts. Trombonist Jeb Bishop isn’t just a foil; he’s a fully-responsive participant as are bassist Jason Roebke and drummer Noritaka Tanaka. All four musicians express original voices through their instruments, Bishop combining his breath and slide in a lubricious tandem that runs a gamut from oleaginous purrs to raucous tailgate slurs and seamlessly threads in polyphonics and diverse bell manipulations. Jackson’s tenor and bass clarinet trade from a similarly spacious tonal spectrum, his phrasing ranging from a breathy drawl to sharp staccato bursts. Tanaka’s percussive presence is active without being busy, avoiding aggressive sticking in favor of agile accents and colorations. Roebke tugs a customary deep rotund tone from his strings, conversing equally with pointillist bow strokes or room-filling pizzicato.

Jackson’s brand of freebop is punchy and porous, built on catchy propulsive themes, but also open to the integration of more texture-based, pulse-resistant expression. “Maker”, “If You Were” and “Put My Finger On It” build sturdily on such structures, the leader taking the second track by his lonesome to start before falling away for a Bishop solo riddled with garrulous, muted growls. The jaunty snap of Roebke’s strings on the third works as a springy launching pad for another blues-saturated statement by the leader. “How-a-Low”, “Since Then” and “Close” turn attention to Jackson’s bass clarinet, the latter two pieces rolling out at a snail’s crawl shot through with brooding space and tonal legerdemain. All four musicians occupy the Riverside Studio acoustics expertly and the disc benefits from a very immersive sound. Though a comparatively recent conscript to his adoptive city’s creative music community, Jackson has swiftly shown a versatility and consistency in common with that of his peers.
Posted by derek at 4:40 AM