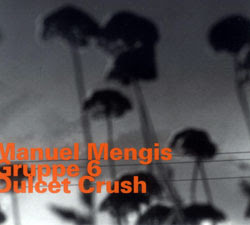 Swiss mountain guide by day, trumpeter by calling, Manuel Mengis is a model of the new millennial musician. His highly personal jazz is a polyglot of influences, mixing in rock, funk, pop and even the occasional bit of pap. Gruppe 6, his working band, represents a similarly deep wellspring of musical resources. Saxophonists Reto Suhner and Roland von Flüe can play cocktail balladry with the same facility as Aylerian scrawls. Lionel Friedli’s percussion philosophy fractures into a prismatic array of beat possibilities. Bassist Marcel Stalder forwards ideas an electric instrument, the better to match wits and licks with energetic guitarist Flo Stoffner, a plectrist who wears his prog and arena rock proclivities proudly. Mengis gathers these disparate talents together for their third album for Hat and regrettably the results don’t quite scale the heights of the band’s previous two entries.

Mengis anticipates such a potential appraisal in the interview snippets the season the disc’s liners. In his own words, life changes and fresh extra-musical obligations necessitated a simplification of process. Where previous efforts reveled in galvanizing long-form explorations, the pieces here are more modest in size but remain ambitious in scope. Mengis still taps diverse sources -“The Opposite of Spring” contains a cell phone ring tone capture of the bell collars on a herd of goats he encountered during an alpine hike- and patterns but their application does carry quite the same galvanizing punch. The telegraphing of intent is also a bit more obvious this time around. Presaging the action on “End Of A Record Breaker” and “Bling Bling Cowboy” and erupting in even more florid fashion on the fist-pumping “Sustain the Gain”, Stoffner’s frenzied fret play ends up feeling overwrought more often than not. Friedli’s interlocking rhythms also stray dangerously close to constrictively metronomic in places.

These tendencies were true of the band’s past entries as well and the arguable missteps don’t diminish the musicianship at their foundation. Mengis’ compositions are well-served from a technical standpoint. “Luscious Delirium” features an extended cool-toned trumpet solo by the leader and several other pieces involve mellifluous chamber counterpoint by Suhner and Flüe, most notably the closing “We Come in Peace”. The ungainly titled “How Mario Tut Tut Got Super Wow Wow” echoes its video game inspiration through hectic prog funk hurdles that the players clear convincingly as a team. Compared to Gruppe 6’s first two outings this third feels the weakest of the three, but it’s still a worthwhile listen for those on safari for up-to-the-minute post-fusion sounds.
Posted by derek at 5:45 AM