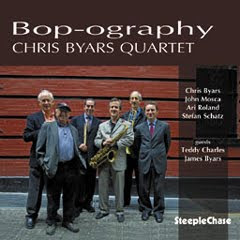 On the occasion of his second Steeplechase outing Chris Byars cannily continues in a musical rich vein tapped on his first. Gigi Gryce counts as a current healthy obsession of the saxophonist and three of the composers’ pieces grace the program. Another of Byars abiding interests concerns the work and legacy of vibraphonist Teddy Charles, a relatively recent recruit to his circle of collaborators thanks to a long-overdue return to active playing. Charles guests on just three pieces, but his presence is invaluable to the proceedings, particularly the closing title centerpiece. Byars’ father James, on oboe and English horn, is the other guest, overlapping with Charles on just one track.

Byars acumen as an arranger is apparent from the open reading of George Wallington’s “Festival”. After a brisk unison theme and solos by the horns Schatz switches to brushes for Roland’s sawdust-generating bowed solo as Byars and Mosca sketch skeletal distillations of the theme in descending counterpoint. Back on sticks for a closing break, Schatz kicks up the momentum and carries the piece out. Gryce’s “Straight Ahead” and “Lost Love” follow in short succession with the hard-swinging “Minority” arriving later. Roland digs into the blues of the first with audible relish, his tone plush and spongy against the sliding shimmy beat from Schatz. Charles works the cracks after a horn-handled head arrangement, inserting pedal swells and floating clusters and adding his own spectral moan on top. Mosca’s the star on the second, his smoothly enunciated solo riding a loping rhythm of brushes and bobbing bass.

Two more pieces draw from Byars’ series inspired by a Himalayan Art exhibition and the focus of an earlier album for Smalls. After an expansive vertical opening “Himalayan Sunrise” flips perspectives into lush horizontal landscape for intimate overlapping horn lines, Byars’ warm tenor annexing the most space. “Indra” finds Schatz trading kit for kanjira, a resonating tabla-like hand drum. Roland’s arco play doesn’t quite carry enough heft in the context and he’s somewhat eclipsed by the horns until he trades horse hair for calluses. “Nature Boy” time travels back to Charles’ classic Fifties rendering of the tune in the company of Miles and Mingus and is practically overflowing with cerulean atmospherics thanks to his luminous malletry and free-floating coda.

The title track balances bold ambition and grand execution within the accommodating suite-like span of a third of an hour. Built on a suspect Charlie Parker axiom that all jazz is built on the changes to “I Got Rhythm”, “Cherokee” and the blues, the piece nonetheless forms a durable Gestalt on the strengths of participant contributions. Charles nods at the late great Walt Dickerson in his texture-rich and spatially-conscious contributions and with the ensemble at full sextet strength it’s easily the finest outing of the set. By plumbing rather than plundering the past Byars ensures that it will quite some time before he or his colleagues run dry of creative tributaries to tap.

[Steeplechase titles are available direct through Stateside AT prodigy DOT net]
Posted by derek at 4:48 AM