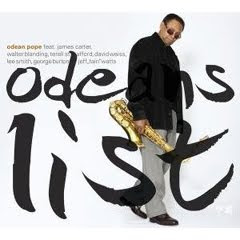 Simple economics and logistics are long-standing enemies to Odean Pope’s influential Saxophone Choir. The viability of his smaller group projects is less susceptible to such concerns and that difference plays out in his discography of the past decade. Only a single album, Locked and Loaded, chalks in the Choir column of his catalog compared to the dozen or so representative of more modest-sized formats. The tenorist splits something of the difference on this latest disc, convening an octet of colleagues to interpret a program of choice charts largely culled from earlier stages of his career. Even with familiar tunes as fodder the possibilities prove their potency in Pope’s full contact approach. Bruises and strained muscles are a necessary risk as is the occasional stumble.

Pope plays with the possible ensemble permutations on the pieces, using the horns en mass for fanfare flourishes and sweeping theme statements. “Phrygian Love Theme” suggests immediate kinship with minor-vamp classics like Mingus’ “Ysabel’s Table Dance” and Joe Henderson’s “El Barrio”. Comparably bold in its canonical roots, the dark velvet theme to Eddie Green’s “Little Miss Lady” has strong ties to “Sketches of Spain” and is the only non-Pope piece of the set. Tenorist Walter Blanding largely contents himself with section work, a single solo early in the set list showing him a worthy recruit. James Carter, fielding baritone and tenor, takes double that number, his brand of burly extroversion into Pope’s robust arrangements. Carter may have a questionable penchant for bombast, but in this context his hard-charging horn play works like a charm. A brass section of two, trumpeters David Weiss and Terell Stafford work in close concert with the reeds, Stafford breaking with the pack more often for punchy declamatory statements on three pieces.

The rhythm section isn’t just window dressing. Pianist George Burton factors prominently into the arrangement of “To the Roach”. The lengthy “Say It Over And Over Again” is basically a balladic duet between Pope and stout-fingered bassist Lee Smith while outside of sandwiching collective theme statements, the title piece pares principals down to just the leader and Watts in a volcanic dialogue. “Blues For Eight” finds Pope parceling out his accompaniment into bass and drums and generating a huge head of intervallic steam. Peer Archie Shepp runs down some edifying Pope history in the liners (A Miles-bound Coltrane recommended the Philly tenor as his replacement in Jimmy Smith’s band) and conveys his admiration by naming him as one of his favorite tenors. Pope occupies a similar place in my subjective hierarchy. The power and panache of these performances as a whole point prominently as to why.
Posted by derek at 7:13 AM