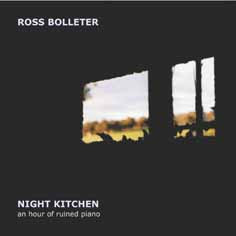 Like Roland Kirk and his panoply of horns, Russ Bolleter faces the charge of gimmickry each time he holds forth on his instruments. Bolleter’s province is ruined pianos, the specifics for which are delineated in his own book on the subject, The Well Weathered Piano (3rd edition). “Ruined” is an important adjectival designation, distinct from “neglected” or “devastated” with a key requirement residing in the condition that no single note sounds like one attainable from an even-tempered upright piano.

This is Bolleter’s second collection of music on Emanem and his tenth since 2000. As with the first, it finds him making music on instruments that would seem upon cursory visual inspection as being unworthy of such attention. Bolleter recognizes the inherent humor and quixotic nature of his enterprise, but he’s also very serious about his investigations. He improvises his pieces and in the case of this particular program, plays nearly all purposefully at night or near dawn with specific sources of inspiration in mind.

Because of their dilapidated anatomies, multiple ruined pianos are often necessary to approximate the musical capacities of their more fortunate and well-cared for cousins. Bolleter commonly employs four or five, situated about his kitchen in such away as to accomplish easy simultaneous access to all. They range wildly in provenance and age with one, a Carl Bernstein, having the distinctly dubious honor of being home to a hive of bees.

The uncertainty built into the instruments by the entropy of nature and circumstance is a key component of the resulting music. Bolleter counts on the unexpected sounds that arise out of their compromised componentry, what he refers to as “dongs, clicks, dedoomps, doks and tonks”. “Goya’s Dog” sounds like a collection of chimes and gongs colluding with clattering typewriter keys and struck bicycle spokes. “Kiss Kiss” changes locations to a dry dam on Bolleter’s property and employs three different instruments than those in his kitchen.

Bolleter’s music broaches clever meta questions about instrumentalist and instrument, but more importantly works on purely musical terms as well. Some of the pieces have a rambling, meandering feel about them, but as Bolleter astutely notes, “the notes that don’t work are at least as interesting as those that do.”
Posted by derek at 10:23 PM