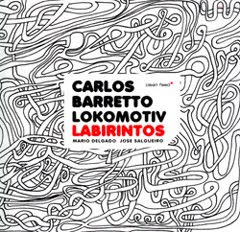 Something of a musical chameleon, bassist Carlos Barretto is also a Clean Feed staple. This set marks his ninth outing for the Portuguese label as either leader or sideman. Guitarist Mario Delgado and drummer Jose Salgueiro are regular colleagues who rejoin him here. The music is typically eclectic, pulling in sturdy threads of rock, funk, folk and admixtures of three with jazz improvisation. The principal snag to my enjoyment of the set lies in the contributions of Delgado, a plectrist of considerable prowess who repeatedly flirts with prog-grounded indulgence. His heavily amplified solos on several pieces land somewhere in an uneasy No Man’s Land between Hendrix and Steve Vai and end up deflating under the weight. Flaccid funk and overblown arpeggios are too frequently a part of his attack.

More measured numbers like the opening “Salada 2” work better in pulling together the trio’s cross-idiomatic elements. Dark arco lines alternate and overlap with plump pizzicato ones. Delgado shifts from clean shimmering picking to taffy-stretching tone swathes and Salgueiro keeps a fluid beat. “Nao Sei Porque” works in like fashion, balancing segments of light and dark and playing cannily with tempo and placement. The title piece is a prime example of the aforementioned penchant for excess. Delgado gesticulates over a turgid lurching beat that’s curiously reminiscent of Jimmy Castor’s “Bertha Butt Boogie” and the yield is arena-ready fusion of dubious quality despite the solid musicianship brought to bear.

“Asterion 5” rights the vessel with a circular bowed statement by the leader that bleeds vibrant overtones and “Tutti Per Capita” demonstrates his skill with a corpulent sprinting line as Delgado picks a parallel commentary and Salgueiro sustains a bustling beat. The metric obstacle course of “Makambira” starts strong, but detours into another longwinded seminar for Delgado’s effects pedals. The final cut “Terra de Ninguem” trades studio for concert stage without sacrificing sound clarity and gives the guitarist a final opportunity at florid rock-tinged expressiveness. Barretto and his partners lose the forest for the trees a bit on this disc, but listeners with a yen for classic work by fusion stalwarts like Pat Metheny and Larry Coryell will probably find the foliage to their liking.
Posted by derek at 7:11 AM