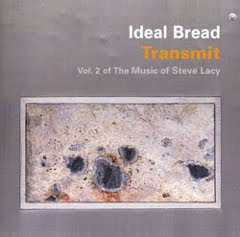 Steve Lacy was a student of Monk for much of his lengthy musical career. Ellington and Herbie Nichols offered other areas for avid study. Lacy was a prolific composer in his own right, but he never lost sight in of the worth in investigating and interpreting the work of his elders. That philosophy of inclusiveness passed directly on to his pupils and fans. Six years since his passing a number of bands are following suit by turning to his songbook for repertoire and inspiration. Operating under the nominal leadership of baritonist Josh Sinton, a former student of Lacy’s, Ideal Bread is one of the best and brightest in that number.

This professionally produced and recorded Cuneiform set represents the ensemble’s second release. Their self-titled first released on KMB, pressed as a limited edition CDR, swiftly fell out of print despite garnering a smattering of encomiums among critics. The quartet picks up right where it left off, tackling seven Lacy tunes of varying vintage and origin in a fashion that relies evenly on all four participants. Sinton is in a somewhat unique position given the years he spent under Lacy’s tutelage and as his copyist. Transcribing tunes en mass after Lacy’s passing he amassed a formidable songbook on which to draw. The pieces balance Lacy’s often arch, cyclic writing with roomy passages for personal and collective improvisation. Bassist Reuben Radding’s richly rendered solo preface to “Clichés”, which narrows into a thrumming ostinato in the ensuing ensemble entry, is but one notable instance among many of Lacy seeds giving rise to original individualized tendrils.

“As Usual” opens the program and the foursome devours it with vigor. Sinton is especially forceful in his solo, bringing the full brunt of his big horn to bear on the shuffle theme but falling short of bombastic parody. Radding and drummer Tomas Fujiwara balance tension and swing in a swaying hammock rhythm. “The Dumps” trucks in humor too, the band pausing for raucous Robert Altman-worthy recitation of the title as mantra before leaping collectively into the corkscrew melody. There’s a section of “The Breath” where the Stinton and trumpeter Kirk Knuffke forgo their usual timbral territories and climb into high perch so often occupied by Lacy’s straight horn. Puckered expulsions contrast with Radding’s steady bass throb and the trickling textures of Fujiwara’s mallets. It’s a fleeting stretch, but one that conveys both esteem and independence within its span. “Papa’s Midnite Hop” flips back to Lacy’s 1976 quartet with Roswell Rudd and even further to the pair’s roots in progressive Dixieland, a fitting full circle closer for a band well-steeped in the vibrant continuum of its inspiration.
Posted by derek at 4:36 AM