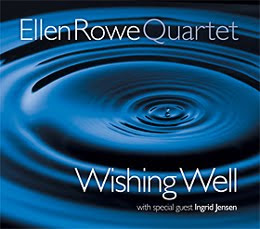 Despite a surfeit of originals and uniformly strong musicianship, pianist Ellen Rowe’s latest offering exudes a disconcerting air of familiarity. Postbop is a signifier applied to a wide swathe of new-millennial jazz. Rowe’s music fits easily within the broad framework, but to my ears it’s also emblematic of the term. The opening track, featuring guest flugelhornist Ingrid Jensen who also sits in on “Longing” later in the set, unfolds in lush dream-like fashion. Jensen sounds akin to Kenny Wheeler in her soft cerulean phrasing and the piece itself wouldn’t be incongruous on a mid-90s ECM project by the Canadian brass man. “Lewisburg Bluesy-oo” swaps styles to an earlier and jauntier hardbop sound, the title an inspiration a contrafact of small-town Pennsylvania and Ducal roots. Rowe’s more animated playing in this context recalls the lithe syncopations of Horace Silver and it’s a sun-dappled blues through and through with a competent set of drum exchanges at the close.

Rowe’s other partners are fine players as well. Saxophonist Andrew Bishop doubles on tenor and soprano and has a grasp of his instruments’ history and possibilities on par with peer Eric Alexander. Bassist Kurt Krahnke and drummer Pete Siers fulfill their roles swimmingly at Rowe’s flanks. Saddled with a brow-arching pun, “Sanity Clause” traffics in light cocktail funk, Bishop gliding the changes against a steady backbeat by Siers that almost slips into the overly static as the piece starts to wear through its welcome. “Seven Steps to My Yard” trades in campy punnery as well, combining Miles’ Spanish tinge with bop components from Bird’s “Yardbird Suite” for a case of not-quite-complementary bedfellows. Still, the piece works better than its title and proves a challenge for Siers in the area of supple rhythmic juxtaposition

Tenorist Andy Haefner is the other guest on the session, lending his horn to the dedicatory piece “For Donald” scripted in honor of his and Bishop’s teacher, recently deceased. The two tenors trade and twine on the balladic theme with Rowe threading gilded comping between, but there’s a distracting production sheen to the piece, the aural equivalent of a Vaseline-smeared lens. Sier and Krahnke are strictly background, but once again they ply their parts with precision. “Alone Together”, the lone standard, caps the set with a supple display of counterpoint between the leader and Bishop. Rowe’s music may form-fit to prevailing tastes and customs, but it’s still for the most part a finely crafted and far from anonymous exemplar of the so-called “mainstream” idiom.
Posted by derek at 5:50 AM