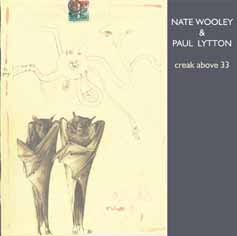 A truism easily lost in the primacy of pedagogy, but some of the best musical moments occur when the getting from Point A to Point B remains a mystery. Trumpeter Nate Wooley comes to this conclusion in his brief, but fascinating notes to this release. His conclaves with British percussionist/electronicist Paul Lytton initiated a fundamental reassessment in his philosophy toward music-making. Lytton presaged this sea change through the formulation of what Wooley refers to as a “mind map”, a hand-drawn schematic attempting to parse all the possible sources, connections and permutations of their common backgrounds in jazz and improv. Reproduced on the cardboard cd sleeve, it looks akin to a Braxtonian flow chart gone wild, roping in everything from Maynard Ferguson to the cowbell on Lytton's kit. Wooley’s own attempt at a map yielded a significantly simplified diagram though the relationships described remain the same.

The upshot of all this pre- and post-cogitating was the simultaneously sobering and liberating realization on Wooley’s part that he hadn’t much of a clue what he was doing. As Derek Bailey might say, therein lays the key to successful improvisation- a freedom from premeditation and stylistic circumscription. The duo’s interplay certainly sounds spontaneous and even random in spots. Four pieces, each amounting to around or under a quarter of an hour unfold in the pristine confines of stereo sound. Wooley employs an amplifier on his bell and Lytton engages an array of live electronics and acoustic complements to his customary drum array.

“The Mbala Effect” encompasses a microcosm of the sound-making possibilities at their disposal. Brittle metallics, industrial construction sounds, brassy blats and sputters, incremental patterns of puckered breath expulsion, scraping cymbals, ping-ponging blips and blaps that almost sound like a busted calliope, gurgling Doppler streaks and several passes at protean melody. Cataloging these moments and components doesn’t even come close to capturing their aural effect. “The Gentle Sturgeon” feels more texture-based, the electronic elements outweighing the acoustic ones by a much wider margin. “Filtering the Fogweed” and “The Lonely Fisherman” swing the balance in the other direction, Wooley loosing eructative whooshs and smears and again picking through snatches and scraps of near-melody while Lytton crafts a canvas of pointillist clatter and patter beside him. Calling it all a challenging listening experience is both stating the obvious and potentially obfuscating the larger attribute of creative emancipation at its heart.
Posted by derek at 7:15 AM