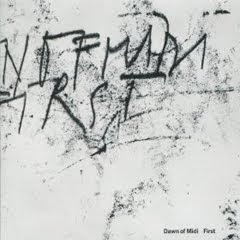 Acoustic instruments operating under a band name implying electronic elements. Unconventionality existing within a context implying convention. These are just two of the intriguing contradictions that accompany this multi-national piano trio. The packaging of their aptly-titled debut is short on descriptive information- just track titles, personnel, website, and a few other bits and pieces of detail. Pakistani percussionist Qasim Naqvi, Indian bassist Aakaash Israni and Moroccan pianist Amino Belyamani are apparent equals in the endeavor and the music reflects the same dynamic, ebbing and expanding in a manner that resists regular melody, harmony and rhythm, but retains an organic structure and internal logic of composition.

Israni carries the copyright on the titles, but all of them sound largely if not totally improvised. He often employs his bass like a second percussion device in tandem with Naqvi who usually tables metered beats in favor of textured scrapes and staggered stick patter. The drummer’s disassembled patterns alternately lurch and slither, occasionally accompanied by the peripheral sounds of assorted “toys” for color. Belyamani weaves snatches of impressionistic melody, relying on repetition and pedal manipulation to create an odd amalgam of transparency and density. Those contradictions are far more than a hat trick however and for a music so frequently built on juxtapositions it’s a remarkably cohesive design.

All three players make liberal preparations to their instruments, dampening keys, strings and drum heads to constrict and warp the timbral properties of their instruments. There’s an abrasiveness to the results, but oddly enough the three also retain an overarching lyricism in their interplay much of the time. It’s as if the Bill Evans Trio was transmogrified into that of Veryan Weston’s or by some temporal trick Erik Satie joined forces with Kent Carter and Roger Turner. All of this name-dropping aside, the trio sounds wholly like itself. Austere, but still inviting, these three players have hatched upon yet another fresh trajectory of expression for that old gray workhorse of improvisation, the piano trio.
Posted by derek at 4:43 AM