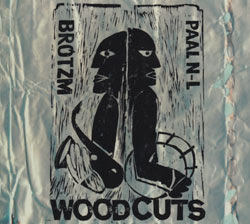 Among the many drummers to join Brötzmann on the bandstand, Paal Nilssen-Love remains one of the most compatible and galvanizing. His mix of muscle and agility continually serves the German well whether it be in a large assemblage like the Chicago Tentet or mano y mano encounter like this set, the second such set documented by the Scandinavian Smalltown Superjazz imprint. The earlier date, parceled as part of the Maijazz Festival in Norway in the spring of 2006, centered on mammoth slab of improv bracketed by several shorter pieces. This concert, recorded at another Norwegian club 15 months later, breaks the menu up a bit into six discrete segments.

Brötzmann follows his customary tack of hoisting one reed per piece. The opening title number uncaps alto, ratcheting into a renal scream early with Nilssen-Love whipping up a frothing sea of rhythms behind him. The energy is high, but the dynamics feel a shade static even with the drummer hinting at a stunted groove late in the piece and Brötz flirting with one his tenebrous themes before an unexpectedly equivocal close. “Glasglow Kiss” starts melodic but swiftly finds him forcefully wringing his clarinet’s neck and riding another roiling, froth-flecked accompaniment. Bass clarinet holds the crowd in thrall on “Strong and Thin” backed by pounding brushes, an admittedly oxymoronic phrase that actually rings valid when the context is Nilssen-Love at the kit.

At nearly 20-minutes, “Rode Hard and Put Up Wet” becomes an extended exercise in Brötzmann’s tongue-in-bearded-cheek crassness, his shaggy tenor honks and vein-bulging vibrato bypassing past parody and arriving at pure catharsis. Nilssen-Love annexes a chunk for a torrential solo that allows him to embrace his inner-Blakey with a barrage of faultless press rolls. The piece carries on into a passage aping a swaying Aylerian march, decelerating loud to soft as if the duo was the target of slow acting sedative darts shot by blowgun from the venue rafters.

With a return to alto on “Ye Gods and Little Fishes” all traces of tranquilizer disappear and it’s easily the best of this litter. Brötzmann engages his partner’s thumping brush patterns in a start-stop succession of rhythmic bursts before a switch to hummingbird sticks. Soon after he tosses a scrap of vintage Ornette into the air and skeet shoots it into shattering shards before coarsening into a grainy vibrato sans Nilssen-Love. The terse “Knucklin’ sounds like a case for uncredited tarogato, trip hammer brushes nipping at Brötzmann’s heels before a close that’s whisper rather than roar. If ducats are few and a choice forced, the duo’s earlier Sweetsweat is the better bet, but this one still has its share of grin-inducing moments.
Posted by derek at 7:12 AM