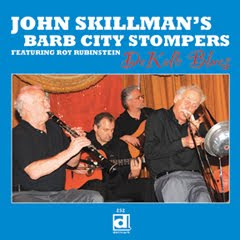 Based in DeKalb, Illinois, the birth-place of barbed wire, John Skillman’s jazz quintet operates just a figurative hop, skip and jump from Delmark HQ That geographical proximity explains, in part, producer Bob Koester’s close affinity for their efforts. The other, even more immediate, explanation rests in the ensemble’s populist blend of Hot, Trad and Swing jazz styles. Clarinetist John Skillman, the leader of the crew, takes his instrumental cues directly from Crescent City doyens like Edmund Hall and Johnny Dodds. There’s Benny and Artie blended in there too, but band’s roughshod brand of playing is far closer to curbside than concert hall.

Pianoless by design, the group does just fine with the rhythm section of guitarist Larry Rutan, bassist Robert Hintzche and drummer Aaron Puckett. Trombonist Roy Rubinstein registers the last in the roll call and his prevalent plunger punctuations draw a bead right back to tailgate aces like Kid Ory and Jim Robinson. All but Puckett have day jobs outside of music ranging from Physicist to Quality Assurance Manager and the drummer holds a post as high school percussion teacher. The upshot is that virtuosity isn’t to be found on this band’s particular stand captured here at the local House Café. Such an absence is hardly a concern though since this sort of music isn’t about flawless prowess anyway. As Wingy Manone was wont to say, where’s the joy in that?

Skillman pilots the ship in a manner worthy of his surname, blowing equally hot on the ensembles and solo breaks and scripting in a fair share of cursive trills as accents. Rubinstein wrings an abrasive corrugated sound out of his bell with derby mute that contrasts charcoal to the leader’s No. 2 graphite. Rutan and his colleagues chug away around and beneath the horns keeping the beat good and syncopated. The playbook is predictably weighted toward ringers starting with plangent percolating take on “Milenberg Joys” that wends and winds a bit too long. The band seems cognizant of their long-windedness and subsequent pieces clock to more modest spans. “Hindustan”, “Sweet Sue” and “Satck O Lee” are standouts, each receiving the spicy Barb-ecue treatment (sorry, a pun too pungent to resist) and wearing any charred edges proudly.

To the unaccustomed ear, trad jazz can sound monolithic in scope. Skillman and his sidemen show that such reductions are not only wrong-headed but easily refuted. The best part is that they make any necessary schooling on the subject an exercise in fun rather than a chore.
Posted by derek at 4:30 AM