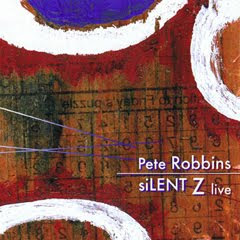 Concert versus studio. That enduring dichotomy of setting is a driving factor in altoist Pete Robbins’ fourth release. His third was a studio affair; one that while deemed an overall success by the altoist didn’t quite muster the intensity of his live work. This set, pulled from a pair of dates at Brooklyn venues, has intensity to spare thanks in no small part to the colleagues convened for the occasions. The other obvious determinant is Robbins’ songbook, an eclectic assemblage of compositions influenced in part by Tim Berne’s work, particularly in the context of Bloodcount. Robbins’ puzzle board pieces a similar metric complexity, highly malleable harmony and an embrace of prog-rock and fusion elements. These are compositions that resolutely avoid stasis and rarely cede an often exhilarating and occasionally dizzying forward momentum.

Of Robbins’ band mates, Tyshawn Sorey is arguably the most integral as a drummer whose rhythmic versatility and perspicacity is seemingly impossible to surpass. His constantly active and pan-directional stick play hardly falls under rubric of subordinate accompaniment, Rubik’s Cube beats coming fast and furious from his kit. Cornetist Jesse Neuman and guitarist Mike Gamble each make ample use of electronic effects with varying degrees of success. Neuman’s horn almost sounds like a chromatic harmonica on the opening “edit/revise”, expanding into Milesean watercolors for his solo. Gamble’s florid rock-inflected runs are sometimes spill over into excessive distraction, but there’s no denying the precision he applies with plectrum and pedals. His rippling melancholic chords in the opening minutes of “his life, for all its waywardness” feature him at his best and the entrance of the others almost feels like an intrusion.

Bassist Thomas Morgan isn’t often a foreground presence, but his contributions are just as essential as his more gregarious partners. The rubber band ostinato snapping gently between Sorey’s chattering syncopations on the flowing “some southern anthem” and the oleaginous unaccompanied introduction to “Bugle Call” are just two example of his sturdy pizzicato placement. The latter is the first of four final pieces that trade Neuman for pianist Cory Smythe and the added ‘acoustic’ presence subtly alters the ensemble dynamic without undercutting its guiding characteristics. Intricate meter investigations and free-spooling melody are still prominent preoccupations, Sorey lighting brushfires beneath Robbins’ and Gamble with his sticks even in the closing tightly-wound collective improvisation. This one took me some time to warm to, but once it clicked the rewards were ongoing.
Posted by derek at 4:33 AM