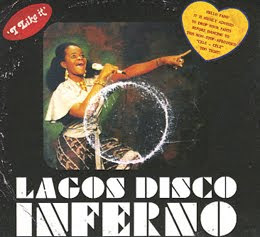 After a steadily snowballing start, African music reissues are now a full-fledged niche industry. Labels like Syllart, Soundway, Strut and African Analog continue to narrow the gap between collectors and casual consumers with a slew of edifying collections. With this disc crate-digging guru Frank Gossner aka DJ Voodoo Funk goes in the opposite direction. The first several releases on Academy were straight reissues of LPs. This compilation culls from a dozen platters to create a listening experience similar to one of Gossner’s club sets.

The title isn’t a case of false advertising. Beats and bass lines are prominent on all of the cuts. African elements often take a backseat to Western funk and dance forms. Lyrics are simple and sung in English, sometimes through heavily-inflected accents. Fortunately, the disco on hand isn’t of the homogenized, strings-heavy Saturday Night Fever. Kitsch and camp are minimal, though many of the tunes do sound strongly derivative of their American and European influences. Rare as these sides might be the music feels much more a product of creative appropriation than indigenous innovation.

Doris Ebong’s “Boogie Trip” bounces along on a Kool and the Gang copped stew of pogo bass, swirling keyboards chicken scratch guitar. Kool’s reach also encompasses a number of other selections including Asiko Rock Group’s “Everybody Get Down”, which soon sounds suspiciously like broken record in its repeating chorus loop. At 8+ minutes in length it’s about five minutes too long. Pogo Ltd. steals the central horn riff from Isaac Hayes’ “Truck Turner” and folds it into a vamp-happy groove on “Don’t Put Me Down”. “Boogie Train” and “Dancing Machine” translate their party-friendly titles into musical currency with more febrile bass, cowbell and sweaty horn breaks, the latter upping the ante with some funky fluttering flute play. BLO’s “Root” accomplishes a similar feat through similar means.

MFB’s “Boredom Pain” is one of the few to track a lyrical course outside a quotidian party sentiment atop a sliding Caribbean-influenced groove and it’s the better for it. Christy Essien’s “Take Life Easy” brings the vibe back to cohesive topicality in a swirl of amplified strings, keys and syncopated drums. Nana Love’s “Hang On” stretches to nearly a quarter hour and once again the somewhat disheartening realization is that African disco artists weren’t all that independent of their Western brethren attends the sounds. Rescued from moldering storage rooms and impromptu landfills through the diligent efforts of Gossner and others, these sounds still sparkle more like baubles than bullion.
Posted by derek at 3:52 AM