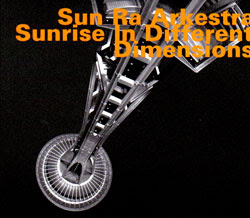 The solitary entry by the Saturnian in the Swiss label’s catalog, this set earns its third pressing on compact disc with this newly-minted hatOLOGY edition. It’s singular in several other senses as well. Culled by producer Werner X. Uehlinger from the band’s first night stand at Willisau in the winter of 1980, the track list skews toward the standards that were a regular part of the band’s repertoire, but infrequent inclusions on record. Space chants and Ra originals commonly took precedence, but here they largely give way to classics by Horace Henderson, Noble Sissle, Jelly Roll Morton and the Strayhorn/Ellington team. All are appropriately Arkestral-ized with bumptious charts that sacrifice polish for unmitigated panache and the old adage “ancient to the future” is in apposite effect.

Also of note is the pared down roster, a not uncommon condition at the start of tours as it sometimes took several days for all the Arkestra members to report for active duty. Bass and trombones are absent, but drummers Chris Henderson and Eric Walker help shore up the bottom end. Reeds dominate the remainder of the ensemble with regulars John Gilmore, Marshall Allen joined by second tier soloists Nöel Scott, Danny Thompson and Kenneth Williams. Trumpeter Michael Ray is a brass section of one and his puckish, kinetic playing does well in tandem with the phalanx of saxophones and flutes. A “get-in-and-get-out” philosophy pervades, particularly on the canonical pieces and the forward momentum of the band rarely flags.

Last, but light-years from least there is Ra, keeping his armada of keyboards boxed in favor leading by acoustic piano. This decision is perhaps the biggest draw of the set. Absent bass places even more onus on his ensemble input. His solos are frequent starting with the opening original “Light From a Hidden Sun”, a bruising and boisterous collision of block chords and deft right hand soliloquies that dizzyingly juggle dissonance and delicacy. Allen and Gilmore speak in pealing stratosphere-register tongues on the controlled chaos of “Silhouettes of the Shadow World” while shorter standard pieces like “Cocktails for Two” and “’Round Midnight” feature them independently. Later program offerings like “Limehouse Blues” and “Lightnin’” strike just as fierce. Outfitted with a fresh 2010 remastering and a stark shot of the Space Needle underbelly as cover, this set sounds and looks better than ever.
Posted by derek at 4:27 AM