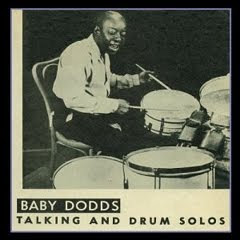 Certain musicologists contend that it all goes back to the drum. Cured skin stretched tautly across wooden frame, struck with palms, fingers or whatever implements handy. In jazz drumming, it’s possible to argue that it all goes back to Baby Dodds. Talking & Drum Solos, a Folkways recording recently reissued by the erudite chaps at Atavistic’s Unheard Music enclave, certainly makes a convincing case. Dodds was practically present for the birth of jazz and his traps powered some of the music’s earliest and most influential ensembles including those led by Louis Armstrong, King Oliver, Jelly Roll Morton and Sidney Bechet. Added to the original vinyl material are field recordings of two brass bands: The Lanesville-Johnson Union Brass Band and The Lapsey Band. Not a perfect fit stylistically, but far from a superficial exercise in fleshing out running time.

While Dodds’ sides are the obvious draw here, they do carry something of an academic archival ambience. The ‘talking’ portions of the program consist of the drummer explicating his various techniques. ‘Drum’ segments follow them up with visceral representations of the lessons. What’s surprising is how forward thinking and incisively creative these tracks sound. His rhythms are still rooted in traditional New Orleans breaks and patterns, but elements of African and Caribbean styles and even hints of free improvisation arise in the various flurries of sticks.

Two “Spooky Drums” pieces find him jumping from surface to surface, punctuating a percolating beat on cowbells with floor tom and bass drum accents to create a propulsive and highly textured sortie. His earlier and contemporaneous sideman work employs similar building blocks, but usually with but a fraction of the clarity and immediacy of the solo pieces represented here. Examples of this sort of ensemble play come to the fore on the montage piece “Drums in the Twenties.”

The brass band music ends up being just as absorbing and enlightening. Hymns and traditional folk tunes form the basis of their repertoires. Delivery and cohesion is often quite roughshod and ramshackle. A basic beat pounded out by a single drummer sets the foundation, across which the various horns slide and shimmy collectively in out-of-tune sallies. The instruments sound as if they’ve seen better days, the numerous dents, scuffs and deformities almost discernable in the mind’s eye. Slightly more complex rhythms form the basis for The Lapsey Band’s tunes along with cleaner fidelity and a better command of their songbook, but the rural informality remains.

Twenty-five tracks all told transpire in just under an hour. The sleeve notes list three more, but they’re strangely absent from the disc. Audible hisses and crackles lace all of the music, though they end up hardly noticeable in the context of their surroundings. Extra insight comes in the form of Kevin Whitehead’s voluminous notes. Dodds and the brass bands are indicative of traditions largely lost to the fickle sonances of time, but their obsolescence does little to detract from their importance or influence.