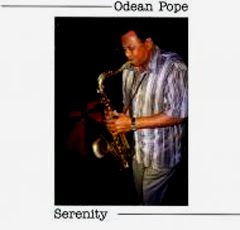 An alternate title for this new Odean Pope project could be “The Umbrellas of Redwood”. And while the lovely Catherine Deneuve isn’t even an afterthought, there’s still plenty of beauty to be found. The actual title is apposite enough, reflecting both Pope’s demeanor and the probable effects of the music on listener. The inspiration for the date came from a quartet session a month earlier when producer Bob Rusch discovered Pope communing in the company of birds in the pre-dawn twilight. That naturalistic impulse governs the saxophonist’s approach here as well.

The “oL” in the new CIMP label offshoot stands for “on Location”, basically modifying the much discussed Spirit Room aesthetic to remote settings. For his part, Pope roamed around the Cadence/North Country grounds playing his tenor, a small contingent of parasols following his perambulations to shield him from the rain. The program is comprised almost completely of spirituals, among them a thirteen-and-a-half minute exposition on Ellington’s “Come Sunday”. The black sheep is a brief and partly atonal rendering of “The Star-Spangled Banner”, though an argument could easily be made for that tune’s inclusion in the “spiritual” category as well.

Pope takes his time with the pieces, paying close attention to tone and phrasing and opening with an affecting invocation of “The Lord’s Prayer”. Engineer Marc Rusch’s mobile mics capture everything, even the sounds of passing cars on a roadway some distance away and the light patter of precipitation. Pope seems at once rapt and calmly convivial and that alloy creates a meditative air in the music. He reminds me a bit of Joe McPhee in his ability to communicate deep soul with an almost Brahmin-like temperance. The affinity for “Come Sunday” makes for another obvious commonality. “Where We’ll Never Grow Old” spools out in plush ribbons of melody that reflect both optimism and playfulness. A second incarnation of the song increases intensity via a shouted sermon snippet, but burns out after just over a minute. “Go Down Moses” also receives two treatments, each one parsing the familiar motif with bluesy purposefulness.

Some may find the absence of sidemen as sounding boards a little off-putting, but Pope uses his surroundings for those purposes. He ekes audible inspiration from the environment. No pressures of by-the-hour studio rates or opinionated production teams to intrude or trammel, just those domes of stretched nylon doing their best to keep him dry.