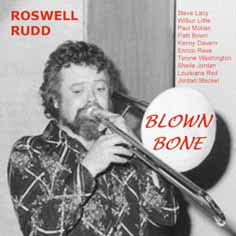 Martin Davidson, proprietor of Emanem, has long made it a custom to include helpful “File under:” tags on his releases to aid harried record shop clerks in correctly identifying contents. Blown Bone, a reissue of a 1979 Japanese-only Philips platter, carries the colorful signifier “Jazz (Free/Blues/Latin),” a definite first in the commonly free improv-focused catalog and one that speaks directly to trombonist Roswell Rudd’s career-spanning eclecticism. The cast of characters is just as colorful with Steve Lacy, Enrico Rava, Paul Motian, Sheila Jordan and seven others convening for a small handful of ensembles. Rudd has always been about placing his slippery slide-calibrated brass in unexpected contexts. This consistently entertaining hodgepodge doesn’t disappoint a whit on that score.

Bouncy freebop gets the party started on “It’s Happening” with Rava, Lacy and Rudd frolicking through a syncopated head and into tasty solos from the trad jazz reminiscent horn configuration. Obscure session man Wilbur Little lays down a rubbery bass line and Motian maintains one of his signature aerated rhythms to keep the quintet percolating nicely. Both get belated solo space in the track’s waning minutes. Vocalist Sheila Jordan joins the action on the ecologically-oriented “Blues for the Planet Earth," a loose funeral dirge steeped in brassy drones that recalls the Art Ensemble of Chicago and paints impending planetary peril in polyphonous hues. The title piece, first in a four-part suite, unfolds as a rambunctious throwback to Rudd and Lacy’s roots in progressive Dixieland bands with a septet strolling another swinging ditty girded by Patti Brown’s comping electric piano.

The craziest combination crops up on the nine-minute “Cement Blues,” where venerable blues guitarist Louisiana Red, his axe ladled with plenty of echo, fronts an octet with Rudd, Lacy, soulful saxophonist Tyrone Washington and trad jazz doyen Kenny Davern on clarinet. The ensuing piebald jam is a mash-up of styles and temperaments that surprisingly works. It’s also one of the finest blues-jazz fusions on record, staying true to its constituents styles while simultaneously evincing a helluva lot of fun and not feeling the least bit forced. Inserted as added centerpiece, “Long Hope” originates from nine years earlier and features some rhapsodic Rudd solo piano. The percussion populated “Bethesda Fountain” completes the suite with an octet rounded out by Jordan Steckel’s bata drum and Rudd’s delicate overdubbed mibra working over an effervescent Afro-Cuban groove. More please.