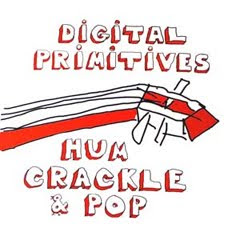 A potent counterpunch to the strangely-resilient “jazz is dead or dying” meme, the Digital Primitives also hone in on a core reason why the beleaguered idiom survives. Bandmates Cooper-Moore, Assif Tsahar and Chad Taylor aren’t much for stylistic fences or formula. Nearly anything their ears encounter is fair game for integration into a music rooted in jazz, but receptive to a large number of ingredients. Recorded in July of 2007 and April of 2009, Hum Crackle & Pop is their second (third, counting a debut with Hamid Drake in place of Taylor) album, and this time judicious overdubbing and post-production play active roles in sound construction. The specific identities of some of Cooper-Moore’s handmade instruments can be a bit tricky to peg under the obfuscating patina of amplification, but I’ll give it the college try.

“Walkabout” establishes the new direction at the outset in a hypnotic convergence of crisp looping drums, warbling mouthbow, tinkling mbira and humming bass clarinet. Rubber band funk bubbles up during “Crackle & Pop” with Cooper-Moore laying down a febrile bass line on diddley bow and Tsahar blowing hot tenor on top through a heavy filter of vibrato and echo. “Love Truth” and “Hum” find the saxophonist shaping loose and soulful Gene Ammons-style blues lines, Cooper-Moore switching to his homemade twinger for a crunchy electric guitar sound, and Taylor laying down a porous backbeat.

As with their past collaborations, politics and personal freedom play prominent parts in the trio’s music. Cooper-Moore gets his Gil Scott-Heron on for “The People,” voicing a declarative rap of populist empowerment over a funky rhythm and threaded-in flute. Jazz tradition gets respect with a revitalizing rundown of the formaldehyde-scented standard “Somewhere Over the Rainbow.” C-M’s sawing and rumbling diddley bow dances with Taylor’s brushed drums as Tsahar glides delicately through variants on the theme. The three veer over into Mississippi Hill Country mannerisms in the chugging percussion, gutbucket tenor and gritty one-chord banjo play of “No Holiday.” The collective improvisation guiding “Herenowhere” wears a bit thin and wobbly, but a well-paced and considered nod to Chicago jazz patriarch Fred Anderson ferries the set out in spirited fashion.

Digital Primitives are touring in support of the album, and bracing as their music is on disc, they’re even better experienced in person where the theatrical facets of their sound-cobbling can garner equal attention.