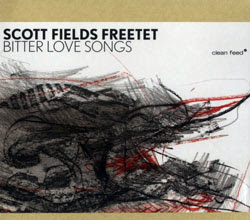 Mordant wit and caustic self-deprecation have always been reliable elements in Scott Fields’ creative expression. From the pithy brickbats of semi-fictional critic Hugh Jarrid to the admirable, if puzzling, practice of publishing pans right alongside praises on his website, the guitarist has never shied away presenting the whole package of his persona, prickly pear portions and all. Even by Fields’ archly candid standards this new Clean Feed outing stands out. His liners read as a suite-like screed, pillorying a succession of unnamed assailants to his temper and patience. He saves the strongest recriminations for last, directing black roses and dead rat vitriol at those who have wronged him in love. Track titles wryly embellish on the conceit, my personal favorite being “Your parents must be ecstatic now”. Despite the dour and potentially distracting emotional context, the set stays sharply on point throughout, though it’s hard to tell exactly how much of the acrimony is genuine and how much is amplified for show.

The music curiously recalls the early Nineties work of Joe Morris in its preference for pared down frills-free interplay. Jagged single note runs race regularly atop undulating bass and drums rhythms. Think Flip and Spike, and more specifically “Itan” and “Mombaccus”, and your close to the aural mark. Fields’ tone is often a bit rounder and cleaner than JoMo’s and that may be a function of the recording, but there’s a comparable frequency of densely knotted note clusters, spit out at staccato intervals. Bassist Sebastian Gramss and drummer João Lobo traffic in comparable agitation and irascibility, shading in the cracks around Fields’ chattery plectrum pings while still keeping the pieces intentionally off-kilter. It’s a dynamic intended to ape the disquieting feeling just prior to when one’s heart goes under the knife of betrayal and scorn. The pieces follow similar schemas until “I was good enough for you until your friends butted in” when the seething clouds break a bit into more spacious variation of melancholy. This is easily Fields most jazz-oriented album in many moons and a welcome fang-fringed spin on familiar forms.