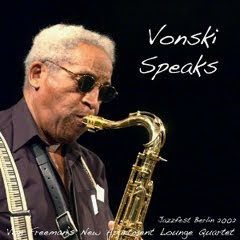 “Did you have your Wheaties?” So inquires tenor saxophonist Von Freeman of his drummer Michael Raynor in the playful spoken preamble to the concert on Vonski Speaks. Freeman’s been figuratively eating that Breakfast of Champions for years, erasing any adverse assumptions about his octogenarian age with an improvisational acumen and stamina that’s indicates only minimal signs of erosion. The music on this set dates from around the same time he signed on with the Chicago-based Premonition label, an association that yielded a string of strong albums over the previous decade. His playing here is arguably even better, finding him in splendid form in front of a fortunate audience at the Jazzfest Berlin in the fall of 2002.

Freeman’s rhythm section, the same that’s accompanied him on weekly gigs at Chicago’s New Apartment Lounge, provides the kind of proactive support that comes from a longstanding relationship on the bandstand. The disc’s title piece evinces that rapport at the onset and speeds along for 10-plus minutes. Raynor and bassist Jack Zara sustain a sprinting tempo for Freeman to glide and gambol across in his inimitable way. Guitarist Mike Allemana inserts nimble ornamental chording, but sounds a bit reticent in the performance’s initial minutes when faced with the voracious swing of his comrades. When Freeman finally lays out four and a half minutes in, Allemana finds his footing in a fast-picked solo that restores the faith. Zara and Raynor get in heavy licks of their own before Freeman ties it all up in a bow through a breakneck succession of exchanges with the previously embattled guitarist. The captured acoustics, which are warm and veracious, warrant a word here, too, as they give the music an even greater depth and vitality.

The disc is notable as a reunion between Freeman and producer Chuck Nessa, an old, unflagging ally who stewarded two of the saxophonist’s finest sessions of the 1970s on his eponymous label. Vonski’s wry humor is prevalent, both in his banter with the audience and in his reliably iconoclastic approach to thematic improvisation. He dedicates “Darn That Dream” to “all my darlings all over the world” noting that “all the ladies belong to Vonski” and delivering the peach of a punch line that he “dreams a lot” to friendly audience laugher. What follows is 13 minutes of balladic bliss all but guaranteed to seduce even the most jaded jazz listener into rekindled ardor. As sublime as it and the closing foray through Freeman’s own “Blues for Sunnyland,” the show-crowning centerpiece comes in an epic, episodic rendering of “Summertime,” a threadbare Gershwin garment that seems custom-fitted for re-tailoring under Freeman’s baroque adornments. It’s an easy pick for one of the top releases of last year; those who sleep on this sterling set do so at their supreme folly.