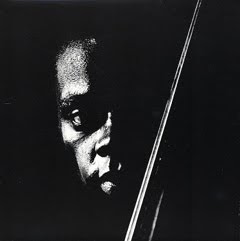 Career rebirths usually serve as manna for the receptive jazz press. Few, if any, are as remarkable as that achieved by bassist Henry Grimes: More than three decades spent in anonymity practically erased by a prodigal return. This ESP reissue gives a composite idea of how he originally went out, on the top of his game and poised to take the logical step to influential leader status. Sadly, that career trajectory wasn’t in the cards. Despite a number of auspicious sideman appearances in the following year Grimes eventually succumbed to personal demons and an ensuing life off the grid.

Perry Robinson practically deserves credit as co-leader on the date. The pair had previously appeared together on the clarinetist’s Funk Dumpling session for Savoy in 1962 and their creative rapport is even stronger in this free-leaning setting from late ‘65. Nods to the earlier meeting include the Grimes tune “Son of Alfalfa”. Robinson brings a battery of extended techniques previously largely the province of the saxophone, from chirrups and hiccups to split tones and judiciously deployed shrieks. These tactics lack artifice and instead feel wholly integrated into the music, something not easily said of certain other contemporaneous albums by peers. “Walk On” and “Saturday Night What Th’” promote the trio’s freebop interests with Robinson and Grimes engaging in some bracing exchanges and the bassist’s scuttling spider legs strums particularly memorable.

As the bluntest point of the triangle, drummer Tom Price is a bit heavy-handed, particularly on snare, and not quite on par with his colleagues. He builds up quite a vertical barrage on “Fish Story”, but there’s little in the way of horizontal movement in the resulting cascade. The suite-like “For Django” asks more from his sticks and he manages to respond with enhanced color and nuance around Robinson’s chalumeau explorations. Grimes is brilliant throughout, his bone dry sawing on the opening of the first piece contrasting with richer harmonic shades in the final minutes of the second. Robust pizzicato patterns shoot forth like gossamer webs and the newly scrubbed sound aids in discerning their complexities. The stereo mix parcels him cleanly into the left channel leaving Robinson and Price plenty of space in the right. Grimes appears busier than ever these days though debate about his abilities lingers. This set harkens to a time when the contingent of doubters was substantially slimmer and as such seems a slice of required listening.