Trio X – AIR: Above and Beyond (CIMPoL) 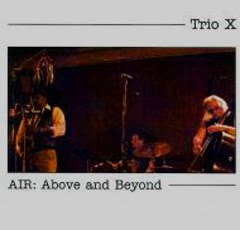 The “X” can now do double duty as a Roman numeral in reflecting this improvising trio’s decade together as a unit. On this latest offering, they cop a page from the Vandermark playbook: Four out of the seven pieces carry dedications to fellow musicians. The extended opener “Fried Grapefruit” celebrates Henry Threadgill, starting as a porous chamber music dialogue between drums and bass. The mood turns heated with the entry of McPhee’s tenor (fitted with a bass clarinet reed), but eventually scales back again with another turn into somber balladry. The closing minutes settle on a sliding funk groove as underpinning for honking and bleating tenor, several facets of Hemphill’s irrepressible personality translated into sound. “Jump Spring” for William Parker, sketches a similarly apt aural portrait, pivoting on Duval and building from the sort of soulful ostinato so often the province of the bassist honoree. “2128 ½ Indiana”, commemorates an address that perceptive jazz fans will recognize as the former digs of the Velvet Lounge. Fred Anderson is the figure of adulation at that storied establishment and McPhee pays homage with a wooly extemporization that is as melodically astute as it is rhythmic on the tail of Rosen drum preface that mixes similarly compatible properties.

A Trio X outing wouldn’t be complete without at least one spiritual. “Close Up” covers that base in the combination of Duval’s grainy arco and McPhee’s raspy tenor. Rosen holds silent, eventually returning with restrained brushwork to bracket McPhee’s Ayler-informed musings. The drummer also sidelines himself for “Here’s that Rainy Day” and the ensuing tenor and bass duo points to the remaining pair’s concert the previous day (also released as a CIMPoL set). Ellington is the recipient of the last aural encomium with the powerful “Give Us This Day”. McPhee bites hard on his reed to create another spate of sustained gravely cries that periodically venture over into vocalized polyphonics. His colleagues cobble a comparably impassioned context around him. “A Valentine in the Fog of War” finds McPhee in oratory mode, his words muffled, but his ensuing tenor line speaking with audible force before tapering into a melancholic interpolation of “My Funny Valentine”, another Trio X staple.

The last track illustrates a deviation from past albums in their catalog in the session particulars. Engineer Marc Rusch adapts the CIMP aesthetic of minimal inference to concert settings for the newly christened CIMPoL imprint. Expanding his recording field to the world writ large will offer him a renewable resource in terms of liner comments (after several hundred essays on the relatively static environment of the Spirit Room, the space yields few new surprises), but it also presents a new slate of ever-changing challenges. From a listener standpoint, application of ear goggles might be a good bet as the dynamic range requires a bit of concentration on the quieter end. All in all, it’s memorable set and a fitting precursor to an even more momentous offering rumored for release later this year.