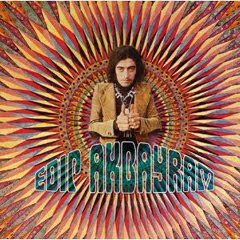 Edip Akbayram rose to stardom in the rubble of the first wave of Turkish rock music influenced by Western progenitors like Pink Floyd and Led Zeppelin. This German collection is scant on annotative particulars but the two dozen tracks appear to be pulled from his first two albums and a handful of singles all cut in the early Seventies. That paucity is balanced by a scrapbook of period promo photos featuring Akbayram and his band Dostlar oozing charisma in various iterations of psychedelic super-group attire. Fuzz guitar, fatback bass and Farfisa organ collide with traditional Turkish instruments including oud, kanun, tanbur and dumbek. The grounding riffs on the first four numbers starting with the deceptively-titled “Little Snowflakes Falling” approach Sabbath levels of heaviness. Other pieces leaven the rock focus in favor of stronger pop flavors. Akbayram’s songs reflect his lifelong travails with the after effects of polio affliction and are commensurately brooding in their topicality. My favorite cut, “Don’t Touch My Sad Soul” fuses the disparate elements perfectly with gravitas-powered vocals soaring across monolithic groove of wah-wah-lathered frets, trampoline bass, and pounding drums. Another song sums up his worldview with the simple expectation of “Sorrow and More Sorrow”. Some of the title translations come with unintentional humor attached, the best examples being “Because of Your Black Eyebrows”, “The Mountains Made Me Sad”, and “It Burns” (the last a lamentation on the outcome of an ill-advised groupie encounter?). Akbayram was serious about his art though and it shows in the audible passion he brings to the performances.