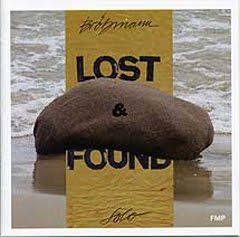 Not a year passes that at least a handful of new Peter Brötzmann records don’t make it into the marketplace. The German reedist is consistent in getting his work into the hands of fans. Despite that reliable fecundity, solo statements are comparatively few and far between. The last was Right as Rain, a pathos-rich tribute to his deceased colleague Werner Ludi, from 2001. All to date are on the FMP, the Berlin-based label where a sizeable chunk of his discography also resides.

While Brötzmann has always been absent of artistic artifice and uncompromising in his insistence on emotive expression, his solo projects have opened avenues to experiment in more oblique areas, whether wielding his Brötzophone in breathless tribute to Oscar Wilde or soliloquizing in minimalist fashion on mouthpiece sans horn. Lost & Found returns focus to the sort of hard-nosed blowing he does best while still leaving space for several “out-of-character” surprises.

Recorded at the Nickelsdorf Konfrontationen in the summer of 2006, the record hearkens back to his 1876 solo effort in keeping the action within the confines of an LP. Five improvisations ranging in length from a quarter-hour to just over three minutes serve as fertile vehicles for four of his horns. Nearly half the program is dominated by his alto, a horn that often plays backseat to his tenor in other contexts, and it’s an invigorating change in focus. “Internal Rotation” covers the respectable gamut of what he can do on the smaller reed, opening with sharp linear bursts of clarion intensity before moving into coarser cascades of vibrato-heavy blowing and onward.

Brötzmann’s keen pitch control in the clarinet-governed title piece points to skills far beyond the typical reed-shrieking he’s typecast for. His tarogato work on “Universal Madness” is similarly revealing. It’s arguably the most unforgiving member of his arsenal and one where a propensity for piercing ululation can often grate rather than enamor. Here, he opens the Hungarian horn up and puts to tape a startling, if brief, segment that could almost pass for an Evan Parker soprano solo in its split-tone clarity and complexity.

“Got a Hole in It,” the lone tenor track, also defies expectations and features Brötzmann’s most melodic playing of the date. The knotty improvisation moves from stratosphere-scraping multiphonics in the opening minutes to purring growls that land comfortably close to the vernacular of vintage Archie Shepp. Near the end, he unexpectedly slips in a dog-eared sliver of Monk’s “Crepuscule With Nellie.” That sort of winking at the jazz canon isn’t unprecedented in his oeuvre (cf. the boiled-down baritone rendering of Ornette’s “Lonely Woman” that opens 14 Love Poems from 1984) but it’s certainly rare. “Turmoil,” a terse and excoriating alto sortie, takes the set out and immediately primes the listener for a repeat trip.