Lin Halliday – Where or When (Delmark) 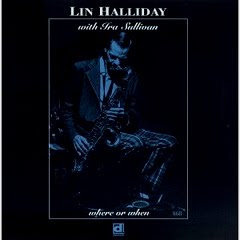 Here’s an old favorite that I didn’t even realize was in need of re-pressing prior to receiving the promo. Saxophonist Lin Halliday is in certain senses the Herbert Huncke of jazz, a hard luck magnet and itinerant who could bring sporadic savant-like genius to his art. Numerous are the tales of Halliday’s self-sabotaging ways, his brushes with fame, and his dogged dedication to jazz. This date comes from the middle of his Delmark renaissance when a shot at 11th hour acclaim appeared not just possible, but probable. Alas, it wasn’t to be and despite a handful of records Halliday passed away within a few years in virtually the same state he started. The other major draws of the disc are the presence of Ira Sullivan as Halliday’s front line foil and the blue-chip Chicago rhythm section of Jodie Christian, Larry Gray and Robert Barry as support.

The song list is nothing special, basically mothballed bop blowing vehicles and ballads, practically second nature to the participants. But it’s those sorts of tunes at which Halliday excelled, filtering them through his insular improvisational methodology to create discursive extrapolations in a manner owing much to a certain Mr. Rollins. Sullivan, switching between tenor and trumpet, is very often the straight man by comparison. Ditto Christian and Gray, though Barry brings some irregularities to his rhythms that serve as reminders of his youthful sojourn as Sun Ra’s stickman. Halliday is a bit of an acquired taste and there’s something to the skeptics’ claims that his playing peculiarities were byproducts of his lifestyle rather than intentional. Those who dig their bop spiced with pinches of salt and cumin would do well to check this and his other Delmark sides out.