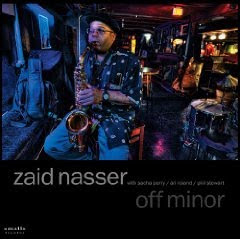 From title to back-story, altoist Zaid Nasser’s Smalls debut communicated a situation indicative of the jazz life, that of the colossal talent constrained by the circumstances of public indifference. This second act feels more hopeful and, by proxy, more relaxed. Nasser’s still scuffling for gigs along with his peers, but he’s been visited by a few strokes of fortune as well. Foremost among these was a spot on a three-week government-sponsored tour of Europe and Central Asia. According to saxophonist Chris Byars, the gig as musical ambassador suited Nasser’s natural temperament and led to a new sobriquet, “The King” (available now that Benny Carter’s no longer with us).

The sidemen are the same as on Nasser’s earlier outing, but that’s hardly a recipe for redundancy given their stature as Smalls’ informal in-house rhythm section. Bassist Ari Roland evinces his usual arco preference in solos, reserving a bulbous pizzicato thrum for the ensemble passages. His bow plies dry friction like fingers rubbing across balloon rubber, bringing to mind a sour-pussed Paul Chambers in overall effect. It’s a novel sound fashioned by a precision touch, but still one that sometimes gives me pause in its stringency. Drummer Phil Stewart keeps an easy cymbal-dominant clip, flanking pianist Sascha Perry’s bop-limned progressions and rolling out frothy breaks at just the right junctures. Nasser’s sudden sprints into corkscrew trills are but one device designed to summon listener surprise. His tractable way with a line rarely adheres to premeditation either, stretching and contracting in a voice that obliquely taps Gene Quill tartness and couples it with pervasive warmth.

While the chosen tunes are nothing revelatory — a rack of fusty old bottles capped by a closing original blues — Nasser and his colleagues wring streams of nectar from them anyway. Their reanimation of Cole Porter’s “You’d Be So Nice to Come Home To” is one of several impressive feats and packed with vivacious ensemble conversation, particularly between Roland and Stewart. Dialing down to ballad tempo for a luxuriant stroll through “You’ve Changed”, the four are no less expressive or on point. Nasser’s big break remains elusive, but he hardly seems stymied by the wait. Based on what he and the others bring to the date, music-making is evidently often reason and reward enough.