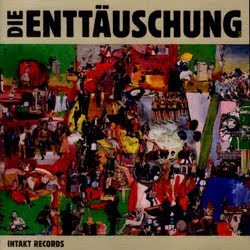 Despite a name that translates from the German as “The Disappointment,” Die Enttäuschung’s music is neither sad-sack nor defeatist in design. Fifteen years is a long time to shoulder a self-inflicted pejorative if the sentiment behind it isn’t tongue-in-cheek. Over that span, the band has cemented a durable songbook and performance dynamic that reliably contradicts their dour title. Recent years have found them straying from the repertory-minded music typified by their Monk’s Casino collaboration with pianist Alexander von Schlippenbach (also on Intakt) to a more personalized slant that references the composer in spirit rather than letter. As with their last self-titled Intakt release, this latest emphasizes kinetic, improv-weighted tunes that cater to the strong personalities in the ensemble.

Rudi Mahall has managed, somewhat miraculously, to sidestep the looming shadow of Eric Dolphy on his bass clarinet. His fleet and quirky voicings favor the middle register often sounding like a hollowed-out alto, though sputtering intervallic leaps also come as frequent punctuations. Axel Dörner’s trumpet completes a natural dyad in the front line, his brassy slurs and collar-ruffling phrasing keeping things delightfully off-center. Bassist Jan Roder and drummer Uli Jennessen don’t profit directly from the pole-positioning of their colleagues, but both are just as active and essential in sustaining the split-second variability and rigorous forward momentum of the group.

All four players share in the seeding of the quartet’s songbook. Mahall’s “Rocket in the Pocket” reels out in a stuttering convergence of jumping-bean horn lines and carbonated rhythmic accompaniment. His tightly-circumscriptive “Weiner Schnitzel” spills out in choppy squiggles and loops like so many sausage links. Jennessen’s five tunes run from the angular balladry of “Uotenniw” to “For Quarts Only,” a curious conflation of Lacy and Coltrane that contains a ghostly watermark of “A Love Supreme” in its sing-song theme. Ornette is another obvious anchor, evident in the freewheeling relays that occur between the players on Roder’s “Salty Dog.”

Track for track, it’s a thrilling album, one that merges daredevil aural acrobatics with an underlying professionalism that all but eliminates the likelihood of anyone cracking their skulls open on the big-top floor. The single affirmation of that ill-fitting band name arrives with the realization that the entertaining spectacle is only an hour long.