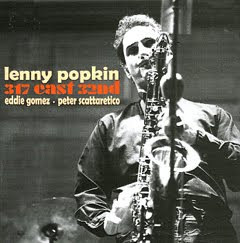 The title on this one is a telltale wink as to the stylistic roots of its principal: Lenny Popkin was and remains a Tristanoite at heart. Like many in the blind pianist’s orbit, the tenorist’s recording opportunities have been unduly sparse over the decades. This album, recorded by pianist Connie Crothers in front of a New York City audience in the fall of 1979, was Popkin’s first as a leader and it’s an instantly endearing monument to his improvisational powers. Sound is a shade dodgy and distanced in places, but never less than listenable and the crowd(s) on hand offer up applause and appreciation that often tips over into the ebullient.

The presence of Bill Evans’ bassist Eddie Gomez accords immediate credence to the leader’s credentials and though a sideman he still gets in his share of good pizzicato licks. Drummer Peter Scattaretico suggests no similar proof of Popkin’s esteem, but he holds his own in delivering tip-toeing rhythms and crisp cymbal accents. The set list is an assortment of standards and contrafacts that follow the Tristano custom of grafting new melodies to evergreen chord changes. Popkin’s lithe versatility with a line and aerated tone trace swift kinship with those most famous of teacher’s former pupil’s, Konitz and Marsh, but there’s more going on as well in the tart keen that sometimes crops up in his clever coining of a melodic phrase.

Popkin pulls a direct page from Marsh in his near-verbatim recreation of Lester Young’s solo to “When You’re Smiling” and still manages to put his signature on it. Similar outcomes arise out of brief but busy sortie through “Body and Soul”. Another number, “You’re Irreplaceable”, nods to Roy Eldridge, balancing swing bounce with a cool-minded equilibrium in construction. On the closing “Anthropology” he brings to mind obscure West Coast saxophonist Steve White through a playful scat vocal. The White comparison actually jibes reasonbly well on his horn work too in the way both men carry audible Lestorian influences.

Popkin’s recorded periodically over the years though nearly all of those efforts are hard to come by these days. Easier to locate are his handful of documents as a participant in Crothers’ projects though even those require a diligent search. Here’s hoping the reissue of this set leads to a return of easy access to what’s come prior and a renewed lease on new work from this little known standard-bearer of the Tristano sound.
Posted by derek at 12:56 PM