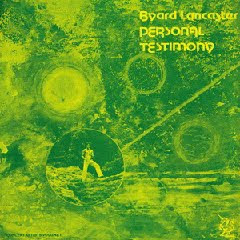 Originally circulated on Byard Lancaster’s Concert Artists label in an extremely finite pressing, this 1979 solo manifesto is among the rarer Philly ‘free jazz’ artifacts. Filing it under that loose genre heading feels slightly suspect as jazz is only one of the stylistic kegs tapped in its creation. Lancaster folds in African, Asian and Native American elements as well as healthy of blues and soul. The Porter records reissue adds six tracks to the original vinyl nine, the new pieces having been cut in 2007 and sitting well with their antecedents. Lancaster hedges a bit on the album’s solo credentials, regularly employing overdubbing to couple and layer instruments from his arsenal. The plaintive “Miss Nikki” sounds more like a Terry Callier song with its cascading piano chords and soulfully sung entreaties. “In Lovingkindness” and “Dogtown” are the first of several flute numbers, the former piece adopting a meditative cast through twining trills while the latter aims for velocity and vigor via aerial acrobatics nearly on par with those of Rashaan Roland Kirk.

Accentuating the personal parameters of the project, each piece carries a postscript providing brief clues to its import and origins. “Brotherman” blends breathy bass clarinets. “Hoodoo” for alto and “What Friend We Have in Jesus” for soprano draw immediate comparisons to Joe McPhee in their spiritual mellifluousness. The two reeds voice in tandem on the lush ballad “Marianne and Alicia” while “Mind Exercise” pares back down to alto in a barrage of harsh upper register shrieks. Fast forwarding nearly two decades, the ’07 pieces find Lancaster expanding his palette and engaging in a curious avuncular commentary. “Prayer Cry” and “Tribalize Lancaster” play to the directives of their titles, mixing playful vocal effects, chanting and piquant flute with what Lancaster terms “percussion spiriting”. The first even weaves in sampled African tribal field recordings to explicate its case.

“Afro-Ville” and “Free Mumia” bring the afrocentric funk through further convergences of jousting flutes and recitations. Keyboard explorations power “Global Key” and “Loving You”, the former moving from modest beginnings to a full-scale piano and percussion avalanche while the latter threads in pliant flute. Heard as a chapbook of snapshots and musings, the disc delivers a great deal of listening pleasure. Lancaster isn’t preoccupied with chops and instead directs his energies toward sketching aural moods and pictures with digressions intact. Through the conveyance of such intensely personal cartography the veracity of the project’s title holds fast.