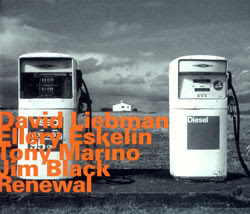 In appraising latter-day tenor tandems, reviewers (this one included) tend to heavily reference the past as context. Each saxophone pair gets compared to a string of predecessors: Player X is the Ammons to Player Y’s Stitt while Player A is Pres to Player Z’s Herschel Evans, and so on. Such shorthand name-checking makes for colorful copy, but it rarely leaves an accurate or lasting impression on the music described. Dave Liebman and Ellery Eskelin face plenty of precedent with their team-up. That they manage to at once embrace and supplant historical potential referents is a chief reason why this second outing hits on every cylinder for nearly the entire duration.

Granted, the game is stacked in their favor from the start given the rhythm section on hand, the sensible amalgam of one colleague apiece from each man’s working band. It’s also no coincidence that bassist Tony Marino and drummer Jim Black occupy positions on the marquee. Reason number one hits like a pallet of bricks on the opener “Cha”, a high energy groove number scripted by the drummer that sounds vaguely Masada-ish. Liebman doesn’t even pause for a theme, flipping the vertical launch switch in a rocket fuel solo that has Marino and Black working overtime beneath him. The duo have their revenge in the tune’s pipeline-riding coda, accelerating full speed into punk Surfaris territory with snapping slap bass and precision pummeling drums and leading to the natural listener affirmation- Kowabunga, dude!

So many times the facing off of like instruments, especially saxophones, leads to a simplification of strategy and emphasis. Outright combat, in the case of the aforementioned Ammons and Stitt, or dapper congeniality as was the frequent repartee of Zoot Sims and Al Cohn are the usual options. In either scenario heads often become disposable obstacles to solos. Eskelin and Liebman sense this skew and go out of their way to ensure the music maintains high standards of intrigue no matter what. Two takes of Dolphy’s “Out There” delve deep into the tune’s bop roots and revolve around a string of incendiary breaks. Again, Marino and Black personify that rare sort of rhythm section, one that risks ruin repeatedly by constantly inviting implosion and ratcheting the adrenaline output as a result. It’s not all fireworks, as the title piece tacks into chamber territory in its investigation of overlapping horn textures and commensurate rhythmic ambiguity. The nine pieces race by, engendering an immediate desire to repeat the trip. Listeners with a sweet tooth for top-tier tenor shouldn’t hesitate in taking this one home.