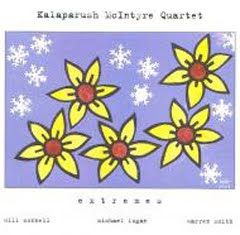 A fine line separates eccentricity and error in improvised music. Saxophonist Kalaparush McIntyre, surreptitiously having dropped Maurice, is a personification of the subjective tightrope between the two. McIntyre rightly holds elder statesman status as an aged member of the AACM, though his four decade plus career is comparatively slight in the discographical department. His last ensemble, The Light, cut a handful of records but now appears kaput. This new group reunites him with bassist Michael Logan who served on his first CIMP session back in 1998. Will Connell, doubling on expressive bass clarinet and alto, is another CIMP veteran having served under trombonist Steve Swell’s leadership on several occasions. Warren Smith needs no preamble and his presence at the drum kit is an unqualified boon for the session, lending a sense of order to proceedings when the leader seems otherwise preoccupied.

McIntyre’s music also embodies the blurred boundaries between accident and mistake, the latter connoting the possibility of volition. Some of his choices on the record sound like mistakes, as when his tenor intrudes on Connell’s heated alto solo on ‘What do you see…” and is summarily parried back. Such a flub could be construed as indication of failing faculties and the album notes do make mention of befuddlement on the part of McIntyre’s band mates in reaction to certain of his moves, humorously dubbed “senior moments”. The logic behind them, however internal, does appear intact and intentional, as on the ballad “Closeness” where McIntyre jumps ranks and travels his own tenor trajectory independent of the support proffered by Logan and Smith. His ironclad rationale in the aftermath: “That’s the way it’s supposed to be. It’s between me and my old lady- closeness”. The “little instruments” segments that bracket a rangy bout of horn harmonizing on the prolix “Early Morning” are also of arguable merit, as are various peculiar pauses and asides.

To some, such insularity of expression will no doubt breed annoyance and even ire. Taken on its own terms, McIntyre’s music evinces ample charms through its idiosyncrasies. He’s an original and always has been. This new cache of music is as undiluted as anything he’s done previous and well worth hearing on those grounds alone.