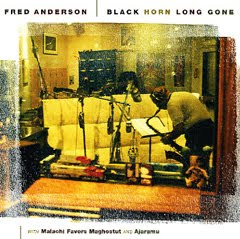 Jazz added another octogenarian to its ranks this past summer when Chicago saxophonist Fred Anderson celebrated another birthday by way of a historic series of performances at the Velvet Lounge. Eighty years on the planet equates to countless gigs and the resulting rich life experience is etched deeply in Anderson’s tenor vernacular. Black Horn Long Gone dates from 16 years prior, to a provenance when his renown was still largely limited to that of a local luminary and he had yet to begin his prolific recording pace in earnest. It’s a studio session originally recorded for the now dormant Southport label and recently distributed by the Chicago jazz stewards at Katalyst. The title commemorates Anderson’s ebony-lacquered Selmer, a staple of his early ’90s arsenal swapped some time ago in favor of the bronzed cousin he uses today.

The well-sequenced set unfolds like something of a proxy “greatest hits” package, touching on a number of Anderson’s compositional milestones and rife with the signature corkscrew blues patterns that populate his often circular phrasing. Art Ensemble of Chicago anchor Malachi Favors, Fred’s senior by 19 months, handles bass and it’s a dream come true to hear the two doyens turning the pages of the Anderson songbook in tandem. The enigmatic Ajaramu completes the trio, bringing a vibrant dynamic range to the drum kit through the deployment of Chicago and New Orleans-influenced jazz rhythms. His second line syncopations on “Malachi’s Tune” give the leader’s snaking lines even greater bounce and bite. Engineer Joanie Pallatto captures everybody in sharp close-up and the recording fidelity is uncommonly nuanced and clean.

Several of the cuts have a bit of an outtake feel about them with abrupt ending on “Three On Two” and the slight intonation problems on the part of Favors’ strings during “Saxoon” being two examples. Most strike squarely on the mark, though. The disc concludes with “Ode to Clifford Jordan,” a surprising solo improvisation dedicated to the then-recently deceased saxophonist that is really an extemporaneous collection of melodic and rhythmic riffs from Anderson’s other tunes. Recycled and reconfigured without accompaniment, even these familiar parcels make for satisfying listening and pique interest for an Anderson solo outing.

The riffs, as well as the other performances on the disc, underscore a criticism lodged at some of Anderson’s releases over the past decade: the tendency to revisit the same dog-eared material to diminishing returns and accompanying conjecture that age might understandably be catching up with him. Anderson’s recent Delmark release documenting the aforementioned birthday bash goes a long way toward putting those allegations to rest. Phrased another way that storied ebony horn may be long gone, but the man who played it is still going strong.