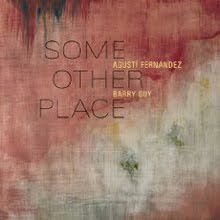 Two instruments in conversation for the length of a recital can tax a person’s patience if the pair operating them isn’t up to par. Spanish pianist Agustí Fernández and British bassist Barry Guy encounter no such hazard in the conclave captured on their latest disc for Guy’s Maya imprint. The two have been collaborating together for at least a decade in a host of groupings and that strong rapport is evident from the openings strains of “Annalisa”, a composition from the bassist’s book that boils down their seamless union of improv and springboard chamber notation. The disc’s other nine pieces cover substantial ground with Fernández contributing twice the number of Guy. Only “Dark Energy”, the disc’s penultimate piece, is jointly composed though its density and zeal suggests a large degree of improvisation.

Guy easily encompasses the timbral territory of cello and guitar on his bass. Or at least he makes it sound easy, his complete command the outcome of five decades spent in the upper echelon of doyens on his instrument. He leaves bow scabbarded until minutes into the third piece, “How to Go Into a Room You are Already In”. It comes out more frequently later in the program, in rumble-meets-drone tone poem “Crab Nebula”, merging with Fernández’s stentorian string manipulations, and during the dark to light pedal-weighted title piece, though first half of the set favors the consummate joys of Guy’s pitch-perfect pizzicato.

“Rosette” ventures into dissonance of a more violent and percussive persuasion, packing a potent and prickly donnybrook of pounding keys and thwacking strings into just over a minute’s span. “Blueshift”, composed with Guy’s wife Maya Homburger in mind, couldn’t be more different in temperament. Lush and mellifluous and laced with a patina of delicate melancholy, it brings to mind the best side of Keith Jarrett’s Standards Trio sans the ego so often evident in that ensemble’s numerous outings. Past recordings may give a reliable gauge of the kind of close communication in evidence here, but they don’t intimate the added benefit a meeting without the diluting effects of additional collaborators brings. At six minutes south of an hour it’s also an ideally sequenced set, intensely satisfying in itself while still leaving the ears primed for renewed exposure.
Posted by derek at 7:55 AM