Record of the Week

My favorite feature of the now-shuttered Bagatellen (aside from the perpetually ebbing & flowing review section) was the Record of the Week. Over the years of the site’s operation, I had a terrific time picking platters from the four corners of my collection and posting brief blurbs about them. After all, man (and woman) can’t live on a strict diet of jazz alone. I’d like to start something similar here but I’m sadly still trying to figure out how to build the right architecture. Until that particular light bulb gets lit, I’ll be posting them as entries in this main blog area starting with the pick below. 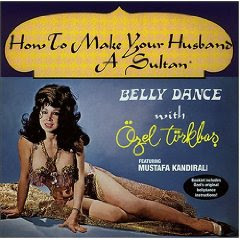 Ozel Turkbas – How to Make Your Husband a Sultan (Traditional Crossroads)

I’m something of a Traditional Crossroads completist (at least I aim to be), though it’s taken me some time to finally get around to picking this disc up. It’s a straight reissue of belly dancer Ozerl Turkbas entre into the U.S. vinyl market and a blatant attempt to cash-in on the craze she pioneered. From chauvanistic title to cheesecake cover the target demographic obviously isn’t so much wives as their husbands. Fortunately, under those garish trappings exists a fairly faithful slab of traditional Turkish music. The big draw is the presence of clarinetist Mustafa Kandirali in Turkbas band. Kandirali was the heir apparent to Sukru Tunar whose microtonal taksims (improvisations) set the bar for the art form during the first half of the 20th century. He’s in terrific form here, shaping soaring ululations and register-leaping trills that easily give Western heroes like Buddy DeFranco and Benny Goodman runs for the money in the virtuosity department. Also on board are kanun (Anatolian zither), violin, hand drum and, to a peripheral degree, a Western rhythmic section of piano and bass. No recording date is documented in the notes, but the provenance seems to be the early Sixties. The album’s centerpiece is a fourteen and half-minute suite designed to ostensibly accompany a full bellydance routine. The notes reproduce a photographic step-by-step by Turkbas on some principal moves and she also lends lilting vocals and finger cymbals to the effervescent folk tune “Tin Tin”. Sales were reportedly upwards of 150K domestically (and one million in Turkey), so it’s hard to levy fault with this successful Trojan Horse that brought these traditional sounds to suburban stateside ears.
Posted by derek at 8:39 AM